Scientists have puzzled for some time over how the Earth first acquired water. Some have theorized it arrived in cometary ice, or possibly aboard asteroids crashing onto the planet’s surface.

“But there’s another way to think about sources of water in the solar system’s formative days,” says Arizona State University’s Steven Desch, a member of the team of geoscientists led by Peter Buseck, Regents’ Professor at ASU’s School of Earth and Space Exploration. “Because water is hydrogen plus oxygen, and oxygen is abundant, any source of hydrogen could have served as the origin of Earth’s water.”

In a paper published in Journal of Geophysical Research, the researchers suggest that the H in our early H20 may have come from the rocky center of the planet itself, left there during its formation. If so, it may be indicative of what happens on other rocky planets in our solar system. 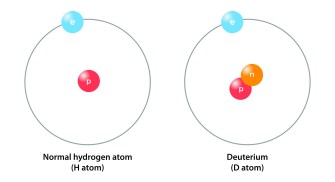 Lead author of the paper, Jun Wu, tells ASU, “The solar nebula has been given the least attention among existing theories, although it was the predominant reservoir of hydrogen in our early solar system.”

Earth has three major areas of water, the most visible of which is the ocean. There are two more “oceans,” however, under the ground dissolved into the mantle. While both hold the liquid, the water above and below ground is not quite the same. It has to do with the presence of heavy hydrogen.

While far and away most hydrogen atoms have a nucleus containing a single proton, the nucleus of about 1 in 7,000 hydrogen atoms has a neutron as well. These isotopes — exceptions to the single-proton norm — are considered “heavy” hydrogen atoms, or deuterium, abbreviated as “D.”

Scientists can ascertain the source of hydrogen by determining its ratio of D to A atoms, or its D/H ratio. The hydrogen in water from comets has a D/H ratio ranging from 150 ppm (parts per million) to 300 ppm. Water from asteroids comes in at about 140 ppm. The D/H ratio down deep in the earth that comes from solar nebulae is a measly 21 ppm.

Most ocean water is about 150 ppm, suggesting that a lot of it is asteroidal in origin, and, indeed, that’s the going assumption. But Wu suggests that Earth’s hydrogen has changed since it first got here, and that “This means we shouldn’t ignore the dissolved solar nebula gas.”

Hydrogen to the core, deuterium to the mantle

The change to which Wu refers is what happened to the Earth’s earliest hydrogen. His team studied the planet’s likely history as it collided with and collected cosmic materials to expand from a moon-to-Mars-sized “planetary embryo” to the form in which we find it.

Wu’s team asserts that the iron in our planetary embryo became molten and sank to become the Earth’s core. As it did, it pulled asteroidal hydrogen down with it. Energy from later cosmic collisions created a magma ocean at the surface, and the iron there also pulled hydrogen, this time from solar nebulae, out of the primitive atmosphere, and sank. Eventually, Earth collided with other planetary embryos, and each time a similar process repeated. And down went all this hydrogen into the Earth’s core.

At the same time, deuterium, which isn’t attracted as strongly to iron, was left behind in the magma, mantle, and atmosphere. The net result is that there’s a lower D/H ratio in the core than elsewhere, and that’s where the hydrogen from cosmic nebulae is. It probably had a much higher ratio when it got here.

“Such processes not only delivered countless hydrogen atoms from the mantle to the core,” says the research, “but also generated an appreciable difference in hydrogen isotopic composition. . . between the mantle and core.” It’s this dissonance in D/H ratios that makes the current belief in asteroidal hydrogen alone as the source of our water perhaps too simple an explanation. 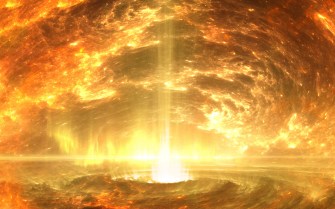 Desch says, “We calculated how much hydrogen dissolved in these bodies’ mantles could have ended up in their cores. Then we compared this to recent measurements of the D/H ratio in samples from Earth’s deep mantle.” Their calculations revealed that, Wu explains, “Our planet hides the majority of its hydrogen inside, with roughly two global oceans’ worth in the mantle, four to five in the core, and of course, one global ocean at the surface.”

“The end result is that Earth likely formed with seven or eight global oceans’ worth of hydrogen,” concludes Desch. “The majority of this indeed came from asteroidal sources. But a few tenths of an ocean’s worth of hydrogen came from the solar nebula gas.” Apparently about 1 in 100 of the water molecules we have on Earth today came from solar nebulae hydrogen.

A particularly provocative conclusion the paper draws is that the production of water may be an inevitable result of the process that forms rocky planets such as ours. As the paper says, “These results suggest inevitable formation of water on sufficiently large rocky planets in extrasolar systems.” There may be water all over the universe.

Ancient organic chemistry.
Up Next
The Present