In 2009, scientists with the Deep Drilling Project were drilling a mile-deep borehole into Iceland’s Krafla volcanic caldera when magma suddenly began creeping into the hole. The team had known, based on geophysical surveys, that a large magma body lay about two miles below the surface. But the surveys had failed to warn of molten rock at these shallower depths.

It was a concerning oversight. After all, Krafla is one of the world’s most closely monitored volcanic systems, so if volcanologists can’t detect shallow magma there, what does that suggest about risk assessments at other volcanoes?

A new study published in Geology explores the potential threats of such hidden magma pools, or “covert silicic magma.” The researchers used the 2009 Krafla incident to assess how hidden magma pools form and whether they might pose previously unknown eruptions risks.

The devil’s in the magma

To better understand the origins of hidden magma pools, the researchers took magma samples from the 2009 Krafla incident and compared them to seven other recorded eruptions within the Krafla caldera involving rhyolite, a silica-rich type of volcanic rock that’s especially explosive.

At first, the team thought the hidden magma pool formed during relatively passive eruptions during the 1980s. But the analysis revealed the samples to be “essentially indistinguishable” from rocks ejected by Krafla’s most recent explosive eruption: a mixed hydrothermal-magmatic event that occurred in 1724. 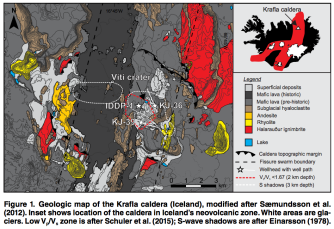 Still, the researchers couldn’t determine exactly how the magma pool formed or has behaved since then, nor could they determine the size of the pool. That’s mostly because modern magma-detecting instruments, such as seismic tomography, can’t accurately identify magma pools smaller than about 1 cubic kilometer.

How could these relatively small magma pools pose major threats? One reason centers on composition. For example, the drillers involved in the Krafla incident struck rhyolitic magma, which is more explosive than basalt, the type of magma that dominates the Krafla caldera.

As basalt ascends toward the surface, it could potentially combine with and “mobilize” the rhyolitic magma, causing a violent eruption that offers “little warning,” the researchers wrote.

“So the concern in this case would be that you have a shallow rhyolitic magma that you don’t know about, so it hasn’t been considered in hazards planning,” study author Shane Rooyakkers said in a press release published by The Geological Society of America. “If it’s hit by new magma moving up, you might have a much more explosive eruption than you were anticipating.”

To better understand and forecast such eruptions, the researchers called for improving magma-detection strategies, such as using extremely dense geophone arrays, which use soundwaves to monitor the earth for seismic events.

If magma-detection technology improves, scientists might someday be able to install sensors around previously hidden magma pools, which could provide warnings of upcoming eruptions. But for now, volcanologists still have much to learn about hidden magma pools, and their prevalence around the globe.

Here’s why mega-eruptions like the ones that covered North America in ash are the least of your worries.
The Future

Neuroplasticity is a major driver of learning and memory in humans.