It is a sad fact of life that everything must come to an end, and the universe is no exception. Based on our current understanding of physics, we have a few good guesses as to what might occur. The universe could cool down to the point where nothing can survive, or it might suddenly collapse in on itself. However, none of these hypothetical ends are as mind bending as vacuum decay.

In this unsettling scenario, a bubble pops into existence somewhere in the universe. Inside the bubble, the laws of physics are wildly different than they are outside the bubble. The bubble expands at the speed of light, eventually taking over the entire universe. Galaxies drift apart, atoms can’t hold themselves together, and the ways that particles interact are fundamentally changed. Whatever form the universe takes after this event certainly wouldn’t be hospitable for humans.

How could this happen?

To understand vacuum decay, first we need to understand the vacuum state. For most of us, a vacuum refers to outer space and other places devoid of matter. However, outer space is not really empty. Instead, it contains fluctuating quantum fields that produce the particles responsible for the fundamental laws of physics throughout our universe. When this space has as little energy as possible, it’s referred to as being in its vacuum state. No matter what, though, those quantum fields are still doing their work holding the fabric of reality together.

We know about 17 particles that come about when these quantum fields are excited, which is just the fun way that physicists refer to a quantum field that has received energy. The photon is an example of one such particle, which we perceive as light and is responsible for electromagnetic radiation like X-rays and microwaves as well. There are also quarks, which become the protons and neutrons in our atoms. Other particles make different forces, like the strong and weak nuclear force, which ultimately provide the rules for how our universe works.

When the underlying quantum fields that make these particles are in their vacuum states, the universe is stable. By definition, a vacuum state can’t lose any energy — if it could, then the way the fundamental particles work could change as well, meaning our universe could stop working the way it does.

Most of the quantum fields appear to be in their vacuum states, so they are stable, and we are safe. However, measuring these things is very, very difficult, and its possible that one quantum field has yet to reach its vacuum state: the Higgs field. 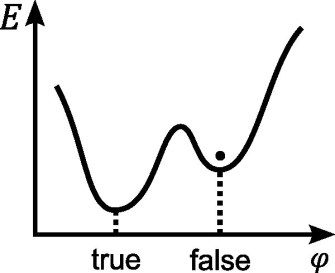 This graph shows the energy states of a hypothetical quantum field. Being in a false vacuum is a lot like a ball being stuck on a valley on the side of a hill; a barrier prevents the ball from rolling all the way down to the bottom to its true vacuum state.

What the Higgs field has to do with vacuum decay

The Higgs field and its associated Higgs boson are responsible for why things have mass at all. It’s why photons have no mass and why Z bosons have quite a bit of mass (for a quantum particle, at least). As such, it’s very important for how fundamental particles interact with each other.

If the lowest possible amount of energy a field can have is called the vacuum state, this valley can be considered to be a false vacuum; it seems stable, but it’s actually got more energy than where the Higgs field wants to be. What could cause the Higgs field to get stuck like this involves quite a bit of math — for the purposes of this article, the important thing to know is that physicists believe it is possible that the Higgs field may have further to go before it can reach its vacuum state.

The problem is, our universe relies on the Higgs field’s properties at its current state. What could push the Higgs field out of its valley? It would most likely take a tremendous amount of energy to do so. But it could also happen because of a weird effect in the quantum world called quantum tunneling. Since quantum particles behave like waves, they can potentially pass through a barrier, rather than over it. Think of this like tunneling through the valley wall that’s holding the Higgs field in place. The consequences of vacuum decay

If the Higgs field broke out of its false vacuum and descended down to its true vacuum state, the physics that govern our universe would unravel. As the delicate balance between quantum particles breaks down, the Higgs field would break out of its false vacuum in a domino effect throughout the universe called vacuum decay. A bubble of vacuum decay would spread throughout the universe at the speed of light. As it passes through, everything — matter, the forces of the universe — would cease to function as it currently does.

What happens afterwards is a complete unknown. The laws of physics would be utterly changed, almost certainly making our existence impossible. Atoms might fail to hold together, chemicals might react in new and uncertain ways, and many other strange things we cannot conceive of could take place.

Fortunately, this theory is based on our current understanding of the universe, which is incomplete. We don’t know for certain whether the Higgs field is in a false vacuum, we just know that it could be. Furthermore, it may take a very long time for the Higgs field to break out of its false vacuum, far longer than you or I will be around for. And, should this event actually take place, there would be nothing we could do to stop it. So, if vacuum decay is indeed a possible end to our existence, its simply something we’ll need to grow comfortable with.