Ever wonder why those pale-orange tomatoes in the supermarket often taste so bland? A new study shows that 93 percent of modern, domesticated tomatoes are missing a version of a gene that gives tomatoes their signature flavor.

The culprit isn’t genetic modification, but rather breeders who’ve long selected for desirable traits that yield the most economic return. Over time, flavor-enhancing genes have been lost or negatively selected during the breeding process. The result is that today’s supermarket tomatoes lack genetic diversity, and therefore flavor.

“During the domestication and improvement of the tomato, people mostly focused on traits that would increase production, like fruit size and shelf-life,” Zhangjun Fei, a plant geneticist at Cornell University in Ithaca, New York, who led the new study, said in a statement. “Some genes involved in other important fruit quality traits and stress tolerance were lost during this process.”

The researchers, who published their findings in the journal Nature Genetics, conducted the analysis by compiling the genetic information of 725 cultivated and wild tomatoes into a pan-genome, which represents the genetic information of all the strains. (The inclusion of wild tomatoes is especially important because they’re more genetically diverse.) Then they compared this information to the domesticated tomato genome Heinz 1706, which is often used as a representative example of tomato genomes, according to Discover. 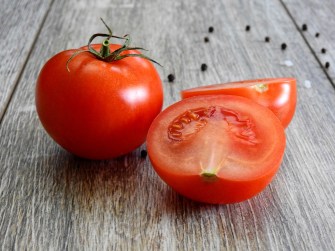 The comparison revealed that Heinz 1706 was missing some 5,000 genes that were found in the pan-genome. Importantly, the researchers found that most tomatoes you’d find in the supermarket lack a rare form of a gene that gives tomatoes flavor. However, this gene – TomLoxC – is found in 90 percent of wild varieties.

“TomLoxC appears, based on its sequence, to be involved in producing compounds from fats,” James Giovannoni, a USDA scientist and co-author on the paper, said in a statement. “We found it also produces flavor compounds from carotenoids, which are the pigments that make a tomato red. So it had an additional function beyond what we expected, and an outcome that is interesting to people who enjoy eating flavorful tomatoes.”

The researchers hope their analysis will provide a more comprehensive resource for the “mining of natural variation for future functional studies and molecular breeding.” In the meantime, it’s possible that tomato breeders will start to return flavor to the vegetables on their own. Giovanni explained that TomLoxC is becoming more prevalent in modern, domesticated tomatoes, even compared to just a few years ago. The likely answer is that some breeders have begun to select for flavor.

Boosting the flavor of tomatoes could make a big difference in how we enjoy our meals, considering that tomatoes play a big role in most diets. For example, in the U.S., Americans eat an average of 20.3 pounds of tomatoes and 73.3 pounds of processed tomatoes each year.

Tags
foodgeneticsscience
In this article
foodgeneticsscience
Related
The Well
The 3 “demons” that haunted legendary scientists
Darwin, Descartes, and Maxwell all believed in these science ‘demons.’
▸
7 min
—
with
Jimena Canales
Harvard professor debunks the biggest exercise myths
Exercise culture is crazy. But what you need to do is exceedingly simple.
▸
with
Daniel Lieberman
Videos
NASA astronaut explains humanity’s trajectory to Mars
The first human that isn’t an Earthling could be in our lifetime.
▸
5 min
—
with
Robert Curbeam
Videos
Are you developing Alzheimer’s?
Only 2% of Alzheimer’s is 100% genetic. The rest is up to your daily habits.
▸
9 min
—
with
Lisa Genova
Videos
Michio Kaku: “We need a second planet”
Humans won’t survive if we stay on Earth. Michio Kaku explains.
▸
7 min
—
with
Michio Kaku
Up Next
The Present
When everyone watches dragons
TV’s shared cultural “now” moments embody the intersection of time and tech.