The Panoramic Survey Telescope and Rapid Response System (Pan-STARRS) telescope is located near the summit of the Haleakala volcano on Maui, and on October 19, 2017, post-doctoral researcher Rob Weryk noticed something odd moving west at an unusual 6.2° angle. Not sure what it was, he checked the observatory’s backlog and discovered an image of it from the night before. A team led by Karen Meech of University of Hawaii’s Institute of Astronomy next examined October 22 imagery of the object captured by the Canada-France-Hawaii Telescope (CFHT) on the big island at Maunakea. The object’s unique angle of trajectory signified that it had to come from outside our solar system.

NASA’s Thomas Zurbuchensays, “For decades we’ve theorized that such interstellar objects are out there, and now — for the first time — we have direct evidence they exist. This history-making discovery is opening a new window to study formation of solar systems beyond our own.” The International Astronomical Union had to invent a new category for it, and designated it as A/2017 UI. 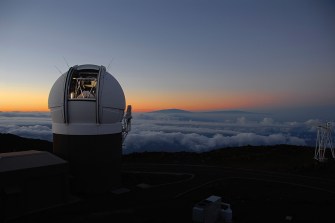 Though it was first thought to be a comet, the October 22 CFHT images had been time-resolved to the A/2017 UI’s rate of motion and revealed a lack of cometary traits, leading to the conclusion that it’s an asteroid.

That unique trajectory is just one of the odd things about the asteroid: Its physical appearance is also surprising. Astronomers observed that it varied in brightness by a factor of ten due to spinning on its axis every 7.3 hours. “This unusually big variation in brightness means that the object is highly elongated: about ten times as long as it is wide, with a complex, convoluted shape,” according to Meech. NASA estimates that it’s “up to one-quarter mile (400 meters) long and highly elongated — perhaps 10 times as long as it is wide.”

And it’s very old. The team saw that A/2017 UI “had a reddish color, similar to objects in the outer solar system, and confirmed that it is completely inert, without the faintest hint of dust around it.” It’s thus believed to be composed exclusively of rock and metals without any water or ice, its color being produced by exposure over hundred of millions of years to cosmic-ray radiation as it wandered across the galaxy and into our view. The U of H team named the asteroid ‘Oumuamua, (pronounced “oh MOO-uh MOO-uh”) which roughly, and hauntingly means, “a messenger that reaches out from the distant past.”

Coming from somewhere in the vicinity of the star Vega — though it was there before Vega was — Oumuamua continues its lonely journey unattached to any system. NASA estimates that as of November 20 it’s moving about 85,700 miles per hour or 38.3 kilometers per second. By mid-December 2017 it will pass from our view on its way out of our solar system, in the direction of the constellation Pegasus.

Dr. Sara Walker is an astrobiologist and theoretical physicist, who is questioning the very nature of life and how we’re attempting to find it elsewhere.
▸
6 min
—
with
Sara Walker
Up Next
Thinking