From the shores of Lake Taupo, a large freshwater lake in the center of New Zealand’s North Island, visitors would have a hard time discerning the geological anomaly lurking below the surface: the Taupo volcano.

Around 26,500 years ago, the supervolcano produced one of the most powerful eruptions in geological history, spewing 750 cubic miles of ash and pumice into the air, covering far-away islands with inches of ash and forever changing the topography of the nation. The Ōruanui eruption was so strong that the volcano collapsed in on itself, forming a 360-foot-deep caldera that’s now mostly filled by Lake Taupo.

The Taupo volcano has since remained active. It last erupted about 1,800 years ago, filling nearby valleys with so much ignimbrite that the valleys were leveled out. But like all volcanoes, its activity isn’t limited to magmatic eruptions; it also includes earthquakes and ground deformation, which can occur without eruptions.

A study recently published in the journal Geochemistry, Geophysics, Geosystems found that the Taupo volcano underwent a period of unusually high volcanic unrest in 2019. The results don’t suggest a supereruption will occur anytime soon, but it’s possible that the Taupo volcano system could produce smaller eruptions in the near future, highlighting the need for improved monitoring techniques.

It was no secret that powerful underground processes have been at work on New Zealand’s North Island. After all, the region near the Taupo volcano was struck by more than 750 earthquakes in 2019 alone. But it wasn’t immediately obvious that those earthquakes were caused by the sprawling volcano system; local tectonic processes unrelated to the magmatic system could have caused the quakes.

To determine the cause of the unrest, the researchers behind the new study analyzed data on the time, location, and magnitudes of recent earthquakes on North Island. The analysis showed that the likely cause of the 2019 earthquake “swarms” was an inflating magma reservoir about 3.1 miles below ground.

“This inflation was contemporaneous with the earthquake activity that was occurring at both the NE and SW edges of the broader magma reservoir,” the researchers wrote. “We suggest that the reason for this seismicity distribution is that in the aseismic region below the Horomatangi Reefs the brittle-ductile transition is very shallow due to the presence of a large magma reservoir.”

Because volcanic activity can signal imminent eruptions, the researchers noted that New Zealand officials probably should have issued an alert for “minor volcanic unrest.” However, they acknowledged that it would have been difficult for officials to determine the cause of the earthquakes in real time. After all, it’s not easy to monitor volcanoes, especially Taupo, much of which lies under a 238-square-mile lake. It’s even harder to forecast eruptions. One key reason is that volcanic unrest alwaysprecedes eruptions, but eruptions don’t always follow volcanic activity. 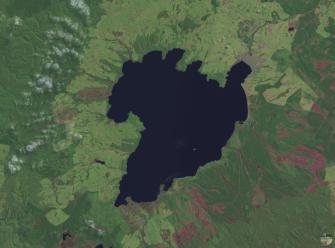 Since the Ōruanui eruption, the Taupo volcano has erupted at least 28 times, the most powerful of which was the eruption that occurred around the year 232. What are the chances of Taupo erupting with similar force in our lifetimes? Not great. A 2020 paper published in Earth and Planetary Science Letters put the annual odds of such an eruption occurring over the next 500 years between 0.5 and 1.3 percent. Magma needs more time to accumulate before a super-eruption is likely.

Still, volcanic eruptions worldwide have killed about 2,000 people since 2000, 22 of whom died when a stratovolcano on New Zealand’s White Island erupted in 2019. The researchers behind the new study said their findings highlight the need for improved monitoring techniques.

“Our findings show that Taupo needs to be carefully monitored to better understand the processes at depth and the factors that might cause similar unrest to escalate into an eruption in the future,” the researchers wrote.

We cannot afford to dream about living on other worlds while we continue to destroy ours.
Hard Science

Methane is a shorter-lived but more potent greenhouse gas than carbon dioxide. Cleaning it up could have a quick impact on global warming.
Strange Maps

True north, magnetic north, and grid north have aligned. There’s also a connection to James Bond.
Starts With A Bang

The inconvenient truth of global warming in the 21st century

Based on data since 2000 alone, global warming is still occurring at a whopping 7-sigma significance. How hot will planet Earth get?
Up Next
The Past

When the mutual relatives of two royal families died, the countries were likelier to go to war.