While there are a number of theories of how life on Earth began (perhaps in hydrothermal vents at the bottom of oceans), one hypothesis is that eventually the early life forms transformed into something between fish and lizards, developing an ability to walk on land. Filling in some crucial details in this idea, researchers from the University of Chicago now showed that human hands have an evolutionary connection to fish fins.

Three years of research utilizing cutting-edge gene-editing methods and innovative cell-labelling techniques yielded the result that small flexible bones at the end of fish fins are related to human fingers and toes (obviously more appropriate for life on land).

An authority on the fin to limb transition, the study’s senior author Professor Neil Shubin, is very optimistic about the results:

“When I first saw these results you could have knocked me over with a feather. For years scientists have thought that fin rays were completely unrelated to fingers and toes, utterly dissimilar because one kind of bone is initially formed out of cartilage and the other is formed in simple connective tissue. Our results change that whole idea. We now have a lot of things to rethink.”

The research team focused on the zebrafish to understand how fins became fingers. Led in this approach by Shubin’s postdoctoral researcher Tetsuya Nakamura and the graduate student Andrew Gehrke, they used the gene-editing technique CRISPR to breed a variety of zebrafish with various targeted genes deleted, including Hox genes which are linked to limb-growing. The breakthrough came after two years of such experiments as well as the refinement by Gehrke of cell-labelling methods to map when and where certain embryonic cells migrated in creating fish mutants.

“It was one of those eureka moments,” said Gehrke. “We found that the cells that mark the wrists and fingers of mice and people were exclusively in the fin rays of fish.” 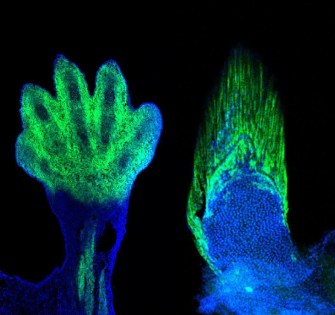 Markers of the wrists and digits in the limb of a mouse (left) are present in fish and demarcate the fin rays (right). The wrist and digits of tetrapods are the cellular and genetic equivalents of the fin rays of fish. Credit: Andrew Gehrke and Marie Kmita.

Researchers concluded that the cells of gene-edited mutant fish stopped migrating from the base of the fin to the tip, essentially sticking around to produce cartilage instead of fins.

“It really took the combination of labeling and knockouts to convince us that this cellular relationship between fins and limbs was real,” Gehrke confirmed.

The scientists are planning more research into links between primitive fish and early four-legged animals as well as more experiments with Hox genes that would shed light on how common cells can produce such different structures in fish and people.

You can read the full study by Shubin and his colleagues here.

Reality is more distorted than we think.
▸
with
Big Think
Up Next
Culture & Religion

An Effective Therapy for Depression

We know that both aerobic exercise and meditation help curb depression. What happens when these interventions are combined?