Stephen Hawking is fed up. He thinks the world is doomed and that we should start preparing our exit strategy now. Easier said than done. Hawking recently spoke out at the Starmus Festival of arts and sciences in Norway. In his speech, the world famous physicist slammed President Donald Trump for taking “the most serious, and wrong, decision on climate change this world has seen.” When asked to comment further the famous cosmologist groaned: “The Earth is under threat from so many areas that it is difficult for me to be positive.”

In two previous statements, Hawking has warned that we’d better formulate a workable plan B in order to punch out in the next century or so, as Earth is caught in a downward spiral he believes we can’t escape. As a result, the professor suggests we find a new home planet in the next two to five centuries. The only way we can do that is to start exploring space for a suitable planet sufficient to sustain life, or even perhaps more than one. Using advanced scientific instruments, we’ve been able to peer into the universe like never before, Hawking said.

“When we have reached similar crises in our history, there has usually been somewhere else to colonize,” he said. “Columbus did it in 1492 when he discovered the New World. But now there is no new world. No Utopia around the corner.” The first logical places to start are the moon and Mars. According to the BBC, Hawking called on nations to colonize the moon by 2020 and Mars by 2025. 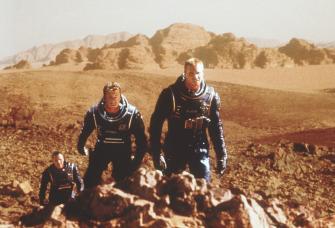 Hawking believes one of our first moves is colonizing Mars. Getty Images.

But each is subject to cosmic radiation, long-term exposure of which could cause cancer and Alzheimer’s. We’ll need to invent proper shielding. What’s more, no one knows how a child being born in such circumstances might fare. The gravity for instance, is way different in both places than on Earth. How would this affect skeletal development? Growing up on Mars might mean never being able to set foot on the Earth, as one’s skeletal system wouldn’t be able to withstand the gravity.

Planet Proxima b in the Proxima Centauri system, approximately 4.5 light-years from Earth, was one such candidate Hawking mentioned. Note that one light-year is around six trillion miles (10 million km). We don’t even have the cryonic process down completely yet. We can freeze a person but we don’t know how to revive them. Beyond that, the distances are just mind-blowing. Even with such technology tucked under our arm, is such a feat feasible?

The renowned cosmologist said, “To go faster would require a much higher exhaust speed than chemical rockets can provide—that of light itself.” He added, “A powerful beam of light from the rear could drive the spaceship forward. Nuclear fusion could provide 1 percent of the spaceship’s mass energy, which would accelerate it to a tenth of the speed of light.” Such technology is theoretical. NASA has tested an EM or “impossibility” drive, and other types of next generation rockets are on the horizon.

Of course, we’d have to harness the power of antimatter to achieve the kind of technological feat Hawking is proposing. Antimatter particles are puzzlingly rare in the universe, even though equal parts of matter and antimatter were supposedly present at the Big Bang. Generating enough antimatter to power a rocket borders on the fantastical. Such an engine remains, for the time being, in the theoretical stages. 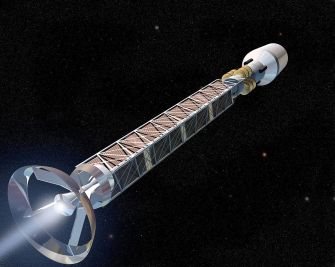 Model of an antimatter rocket. NASA.

Even so the moderator, taking Hawking’s suggestion as granted, feared that we might become complacent or preoccupied in an era of such technology, having the ability to observe the unexplored corners of the universe and marvel at their wonders, as one watches television. But Hawking replied that the peril the Earth is in will motivate us to take action.

Hawking said in his speech:

Human colonization on other planets is no longer science fiction. It can be science fact. The human race has existed as a separate species for about 2 million years. Civilization began about 10,000 years ago, and the rate of development has been steadily increasing. If humanity is to continue for another million years, our future lies in boldly going where no one else has gone before.

Cheesy Stark Trek line aside, Russian billionaire Yuri Milner, Facebook founder Mark Zuckerberg, and Hawking have developed an initiative called Breakthrough Starshot, which plans to comb the universe for intelligent life and Earth-like planets. They plan on sending out hundreds or even thousands of tiny spacecraft, each weighing less than one ounce, to explore the Alpha Centauri star system and see what’s out there. This will be 2,000 times farther than anything from Earth has ever traveled.

This animation depicts the Breakthrough Starshot:

These little spacecraft, called nanocrafts, will be propelled by an array of powerful lasers. The lasers will hit each nanocraft’s solar sail, pushing it along. With such force behind it and at such a small size, they should travel at an unheard of velocity, one fifth the speed of light. Hawking said at the announcement, “With light beams, light sails and the lightest spacecraft ever built, we can launch a mission to Alpha Centauri within a generation.” So far the project has raised $100 million to explore its viability. There will be other benefits besides saving humanity’s collective skin.

At the Starmus festival, Hawking commented:

Spreading out into space will completely change the future of humanity. I hope it would unite competitive nations in a single goal, to face the common challenge for us all. A new and ambitious space program would excite (young people), and stimulate interest in other areas, such as astrophysics and cosmology.

A new study mapped areas of the U.S. that are most likely to suffer natural disasters.
Up Next
Strange Maps

How to Turn L.A. into a Giant Orchard

Perhaps it is more doable now than when it was first proposed, back in the early 1980s