Imagine paper-thin nano-spacecraft being propelled through space at 134 million mph by super-powerful lasers, brighter than the sun. They would also be strong enough to ignite entire cities in minutes, if turned back towards Earth. Where are the spaceships headed? Towards a potential new habitat for humanity in the nearby star system Alpha Centauri, which is just about 25.7 trillion miles away. Now imagine no more – this is not science fiction but an actual project gathering steam.

The Breakthrough Starshot initiative raised $100 million for research from funders like the Russian-American billionaire Yuri Milnerand a host of Silicon Valley investors. Notably, the Starshot initiative included the late Stephen Hawking and the Harvard University astronomer Avi Loeb among its founders. What gives this group additional potential is that their idea for exploring space is based on 80 scientific studies on interstellar travel.

What the scientists, lead by Peter Klupar, the engineering director of the Breakthrough Foundation and the Starshot initiative, figured out after much experimentation and studies is that the best way to send an object to another star is by building a giant laser. 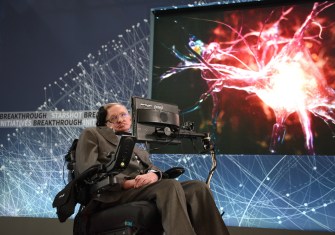 The technology the project is looking to implement would involve launching around 1,000 tiny “StarChip” spacecraft at about 20% of the speed of light towards Alpha Centauri. It happens to be the second-closest star system to Earth. Proxima Centauri, an even closer star system, is also being discussed as a destination.

The chips would weigh about a gram each and be attached to light sails. They would also be equipped with cameras to record everything they see. Propelling the ships through space would be a 100-gigawatt laser “beamer” that would be so powerful it could quickly burn down cities, according to Klupar. That is if it was mirrored back at us by some enterprising aliens (or our own hubris).

Hopefully, such an outcome does not come to pass but instead the Starchips, launched by mid-2030s, would send us back photos of new Earth-like worlds by 2060s. They would travel for about 25 years and there’d be about 4 years for the data to get back to us. 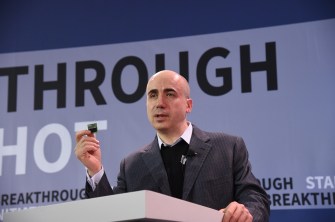 “You would think that this is all impossible, but we have folks at Caltech and the University of Southampton and Exeter University working on about 50 contracts on making all [of] this happen,” Klupar said at the Economist’s Space Summit. “No one has come up with a deal-breaker that we can find yet. It all seems real.”

The project is certainly not without its challenges. A particular technical hurdle to overcome is the design of the light sail that would “catch” the beam from the laser and turn that energy into motion for the spaceship. The considerable challenge is to make it not fall apart from the amazing heat or acceleration and make sure it continues to go on course while avoiding interstellar space and dust, as points out Dave Mosher from Business Insider. Another issue is the massive cost of the laser facility.

While working out solutions, Starshot has already been launching early spaceships into space, starting with a fleet of six that went up in June 2017. They plan to launch more improved models that include cameras next year.

One of the project’s big goals is to build a 1-gigawatt laser station in the Sierra Nevada mountains and send starchips past planets like Mars, asteroids and other space bodies that aren’t as far away from us. These spaceships would travel at about 1% of the speed of light. Mars would be just a few days away. Such an endeavor would cost around $1 billion to make real but the facility could make frequent exploration of deep space quite cost-effective moving forward.

After that, the ultimate goal will be the building of the 100-gigawatt laser – an effort requiring global cooperation, according to Klupar. That laser will be so bright that it will be “seen across the galaxy,” said the scientist. It could also damage satellites, if the launch is not internationally coordinated.

One positive outcome of that, says Klupar, is that it will tell any alien civilization that “intelligent life exists” on Earth, adding “we’re not really doing this just for one group of people. It’s also the whole planet.”

This short story is a fictional account of two very real people — Anaximander and Anaximenes, two ancient Greeks who tried to make sense of the universe.
Up Next
Starts With A Bang

A still image of a visualization of the merging black holes that LIGO and Virgo have observed so far. As the horizons of the black holes spiral together and merge, […]