Given the mounting crises of 2020, wouldn’t it be nice to just get on a giant spaceship and leave this troubled planet behind? While we don’t yet have a surefire candidate for the new Earth, and our tech is probably still decades if not centuries behind, proposals and achievements in interstellar travel are stacking up. A new study makes the fascinating case that if a group of humans were to venture out on a space journey that lasted generations, their language would likely change. It could evolve into something the people of the original Earth would not understand.

Let’s say a contingent of people boards a so-called “generation ship,” a fully-stocked world-onto-itself spacecraft that can sustain generations of humans in space, slowly traversing the heavens towards another possibly inhabitable planet like Proxima b in the Proxima Centauri star system. We cannot yet build such a ship (which might have to fly for thousands of years) unless we invent some type of warp-drive or use antimatter as has been imagined in science fiction, but there have been some initial studies on the subject. 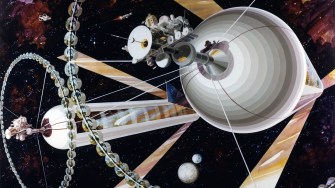 Such a journey could be subject to a variety of dangers and unforeseen circumstances like viruses, asteroids, computer malfunctions, you name it. New research, carried out by linguistics professors Andrew McKenzie from the University of Kansas and Jeffrey Punske of Southern Illinois University, shows what might also happen is that the language of the travelers would mutate. The study highlights the fact that when communities become isolated from each other, conditions are ripe for language to transform. Over time, the spacefaring colonizers would not be able to understand their original language.

In the study, the linguists use examples of effects from long-distance voyages on Earth, like the changing languages of Polynesian island explorers, to show how much language can change, even within one’s lifetime.

Professor McKenzie described a likely (and somewhat sad) scenario in a press release:

“If you’re on this vessel for 10 generations, new concepts will emerge, new social issues will come up, and people will create ways of talking about them,” McKenzie explained, “and these will become the vocabulary particular to the ship. People on Earth might never know about these words, unless there’s a reason to tell them. And the further away you get, the less you’re going to talk to people back home. Generations pass, and there’s no one really back home to talk to. And there’s not much you want to tell them, because they’ll only find out years later, and then you’ll hear back from them years after that.”

What might also happen is that the language of people on Earth would change. So it’s possible, given the distance, and the dwindling reasons to communicate, that both parties might simply not be able to speak to each other as time passes.

One way to prevent this issue – have a member of the crew trained in linguistics or make other accommodations to remember the language of Earth. Thinking even further ahead, the professors propose that each new ship of people coming over to a faraway space colony would essentially contain “linguistic immigrants” and an effort would have to be made to train them in the changed language to help them avoid discrimination.

In case you’re deadset on going to Proxima b, recent research found that using currently imaginable tech, such a trip would take 6,300 years and would need to start out with a crew of at least 98 people.

Check out the study, “Language Development During Interstellar Travel” in Acta Futura, the journal of the European Space Agency’s Advanced Concepts Team.

Tags
cosmosfuturegalaxylanguageLinguisticsnasaphysicsspaceuniverse
In this article
cosmosfuturegalaxylanguageLinguisticsnasaphysicsspaceuniverse
Related
The physics of entropy and the origin of life
How did complex systems emerge from chaos? Physicist Sean Carroll explains.
▸
6 min
—
with
Sean Carroll
The Universe in 90 minutes: The Multiverse, time, free will, God, & more
Everything you ever wanted to know about the Universe, explained by physicist Sean Carroll.
▸
1:33:47 min
—
with
Sean Carroll
Life
“I went to space and discovered an enormous lie”
What astronaut Ron Garan saw in space changed his life forever – here’s what it taught him.
▸
8 min
—
with
Ron Garan
The Well
A futurist sets the stage for the next 1,000 years
We don’t need one Elon Musk. We need 8 billion empathic futurists.
▸
8 min
—
with
Ari Wallach
Videos
The true story behind Carl Sagan’s cult classic, Contact
Do aliens dream about meeting us, too?
▸
with
Jill Tarter
Up Next
The Present
Your emotions are the new hot commodity — and there’s an app for that
Many of the most popular apps are about self-improvement.