You might not have heard of them if you aren’t an astronomer, but the largest known objects in the universe aren’t galaxies or the super-clusters they form together. They’re actually ghostly webs of dark matter that form the boundary between the voids of deep space and the clusters of galaxies where stars shine, planets form, and most of the astronomical phenomena you know reside.

This filament, which spreads throughout the cosmos forming a foam-like structure, attracts dust along its main stretches while galaxies seem to cluster at its nodes. Despite the massive size of these filaments—a typical length would be in the 200-500 million light-year range—it isn’t easy to actually see these things directly.

This is why a new study, published in Astronomy and Astrophysics, is so exciting. It provides the first direct look at the cosmic spider web holding the universe together and reveals hidden galaxies to astronomy. 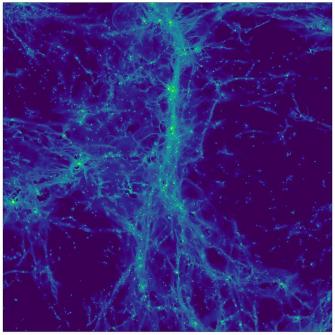 “The image shows the light emitted by hydrogen atoms in the cosmic web in a region roughly 15 million light years across. In addition to the very weak emission from intergalactic gas, a number of point sources can be seen: these are galaxies in the process of forming their first stars.”© Jeremy Blaizot / projet SPHINX

Lots of things in space are hard to look at directly, but it is possible to observe their effects on things near them. Ever since the filament was first noticed in the 1980s, astronomers have been looking at the effect it has on light, such as how it can refract the light from objects behind it when it sits between that object and Earth, and how it interacts with extremely bright quasars. While this provided some data, it left much to be desired.

Luckily, science marches forward, and it was probably inevitable that somebody would figure out how to get a better look at the stuff.

Using the aptly named Very Large Telescope in Chile and a device called the Multi-Unit Spectroscopic Explorer, an international team of researchers aimed at Hubble Ultra-Deep Field. This region, known for being where some of the most revealing images of the cosmos are taken from, was observed for 155 hours, 140 of which produced useful images. After a year of processing, the team produced these images: 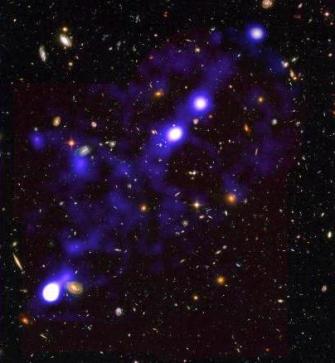 The blue is the hydrogen collecting near the filament. The background is the Hubble Ultra-Deep Field Image.
Credit: Roland Bacon/David Mary/ESO/NAS

The long exposure time allows for the dim light from hydrogen emissions to be collected and formed into an image.

The images you see also include a large number of galaxies that previously escaped detection. A follow-up analysis of the data also suggested that the hydrogen detected by the spectroscopic explorer could be accounted for by assuming the presence of a large number of previously unknown dwarf galaxies. While these galaxies are currently too small to see individually, follow-up studies will know where to start looking for them.

“We cannot see these galaxies, because they are intrinsically faint and too far: we are observing them 2 billion years after the Big Bang — at a distance of 11 billion light-years. But there are so many that we can see the integrated light produced by them.”

While fascinating in its own right, this discovery will lay the foundations for further study of the filament and may lead to a new understanding of dwarf galaxy formation.

Uncertainty is inherent to our Universe.
Hard Science

From time-traveling billiard balls to information-destroying black holes, the world’s got plenty of puzzles that are hard to wrap your head around.
Starts With A Bang

It’s the very closest stars to us that hold the key to unlocking the possibilities for life in star systems all throughout the Universe.
Starts With A Bang

This technological feat changes our cosmic history.
Up Next
13.8

What is life? Why cells and atoms haven’t answered the question.

75 years after Erwin Schrödinger’s prescient description of something like DNA, we still don’t know the “laws of life.”