When Randolf Pohl of the Max Planck Institute of Quantum Optics set about in 2010 to measure the radius of a proton, he knew pretty much what to expect. Dozens of earlier measurements had arrived at 0.8751 fentometers, or fm (a quadrillionth of a meter). Imagine his surprise when his measurement was 4 percent smaller: 0.84087 fm. Pohl had replaced the electron used in previous research with a muon, so the inference was that the presence of a muon was somehow shrinking the proton. This would be a very big deal, a new and unexpected interaction mandating a rethink of particle physics. Indeed, physicists have been trying to crack the so-called “proton radius puzzle” now for nearly 10 years, in hundreds of papers. Now a study by Eric Hessels of York University in Toronto reveals that earlier measurements were simply wrong, according to a paper published this month in Science. Never, as they say, mind. 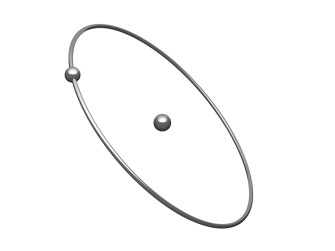 The process of measuring protons is extremely complicated and the technology involved has become far more sensitive over time, so it’s not that much of a shock to learn that the earlier value for a proton’s radius turned out to be off — that 0.8751 figure having been an average derived from dozens of measurements.

In measuring the proton, the key factor is the proton’s interaction with the electron that orbits it. The orbit isn’t the same simple circling path we see in our solar system. There are times when an electron’s path overlaps the proton, and so the electron spends time partially inside it, bound to it, and riding the vacuum between the quarks and gluons of which the proton is comprised.

Eventually, the bond between proton and electron is weak enough that the electron hops back outside of the proton, entering its 2P state. The electron’s energy drops slightly in the 2P state as it has to spend more of it to remain bound to its now-separate proton.

The difference between the 2S and 2P charges is called the “Lamb shift,” after Willis Lamb, who attempted to measure it in 1947. It represents the amount of energy the electron spends escaping the proton, revealing the strength of the proton’s bond during the electron’s 2S state. The proton’s size accounts for less than 0.01% of the Lamb shift, so extremely fine measurements are required, but the larger the proton, the stronger its influence.

To create a Lamb shift to measure, physicists fire lasers into hydrogen gas to cause its atoms’ electrons to jump from 2S to P states. They usuallly use hydrogen due to the simple architecture of its atoms: a proton and just one electron. This (somewhat) simplifies measurements, as other elements’ multiple electrons would allow for potentially complex interactions that would also have to be measured and factored in. 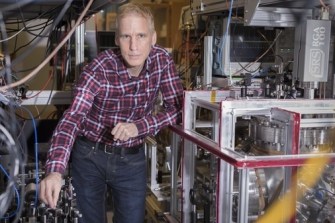 When Pohl got his surprising result in 2010, he was using custom hydrogen atoms in which the electron was replaced with a muon. Muons are particles created by the decay of pions in the atmosphere and are very similar to electrons, with some key differences. First, they last only a vanishingly quick 10-6 seconds before they decay into, typically, an electron, an electron-antineutrino, and a muon neutrino. Most significantly for proton measurement, however, is that they’re some 200 times the mass of an electron.

This is why Pohl used them in his measurements. Since muons are so much heavier than electrons and orbit their protons more tightly, they’d remain in their 2S state longer, and the Lamb shift would be more significantly influenced by the proton’s size than it would be with normal, or “electronic,” hydrogen.

The new measurements by Hessels and his colleagues used electronic hydrogen instead of muon hydrogen to derive their new radius: 0.833 fm, essentially the same as Pohl’s 0.834 within an acceptable margin of error. The technique they developed allowed them to measure the Lamb shift in parts-per-million. “After eight years of working on this experiment, we are pleased to record such a high-precision measurement that helps to solve the elusive proton-radius puzzle,” Hessels tells York’s yFile.

Pohl, who must have wondered at times over the last decade if he had been mistaken, lauded Hessels’ new measurement, reportedly calling it “a fantastic result.” Scoring one for Occam’s razor, he appreciates that the new research “points to the most mundane explanation.”

So the baffling mystery turns out to have been a non-issue all along. This is good news for those seeking confirmation that physicists do know what they think they know about particle interactions, and bad news for those hoping for a reason to blow up the often mind-bending theories of particle physics. Hessels’ own take on resolving such a tantalizing discrepancy lies somewhere in the middle: “We know that we don’t understand all the laws of physics yet, so we have to chase down all of these things that might give us hints.”

The upcoming launch of the James Webb Space Telescope is the event of a lifetime.
Up Next
The Present

The question is, how can we make employment fair for everyone?