While exoplanets appear to be plentiful outside our solar system, the moons that we might expect to be orbiting them are another story. Indeed, last spring it looked like astronomers had finally found one — it was dubbed Neptmoon because of its great size — but that finding now appears less certain.

In light of this quandary, a new paper, published on June 27, looks at what might be happening to “exomoons” that orbit large gas-giant planets migrating inward toward their stars, such as our own Jupiter seems to have done.

The researchers — astrophysicist Mario Sucerquia and colleagues — hypothesize that these satellites break free of their tidal connection to their “parent” planets as they move nearer to their sun. The paper suggests that, at this point, they’re not quite moons anymore — or planets — but “ploonets.”

What’s more, our own moon, the researchers say, may meet a similar fate one day, even though Earth isn’t a gas giant. Warns Sucerquia:

“Earth’s tidal strength is gradually pushing the moon away from us at a rate of about 3 centimeters a year. Therefore, the moon is indeed a potential ploonet once it reaches an unstable orbit.” 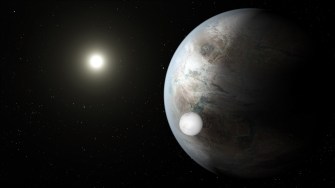 The research in the new paper is grounded on the manner in which large gas giants have been observed to slowly move inward through their solar systems toward their respective suns. It suggests that, as such a body draws close to the star, its moon’s orbit — affected at that juncture by both the gravitational pull of the planet and the host star — experiences an increase in energy, which becomes unstable. This, eventually, releases the moon from the gravitational bonds of its parent parent.

Further, the paper’s conclusions are based on a series of computer simulations that researchers conducted regarding what would happen to a moon orbiting a migrating gas giant. What was discovered?

The models found that 44 percent of the moons would meet their demise by being pulled into their planets (this could explain some of the planetary rings that have been observed). The system’s star would seize and destroy another 6 percent. Significant amount of exomoons, however, — about 48 percent of them — would split off from their planets and begin orbiting their star as “ploonets.” Around 2 percent would be blown out of their solar system altogether.

This would certainly explain why we haven’t definitively found any evidence of exomoons yet.

Tags
astronomycosmosexomoonexoplanetmoonnasaplanetsploonetsciencespace
In this article
astronomycosmosexomoonexoplanetmoonnasaplanetsploonetsciencespace
Related
Life
“I went to space and discovered an enormous lie”
What astronaut Ron Garan saw in space changed his life forever – here’s what it taught him.
▸
8 min
—
with
Ron Garan
Hard Science
10 paradoxes that will stretch your mind
From time-traveling billiard balls to information-destroying black holes, the world’s got plenty of puzzles that are hard to wrap your head around.
The Well
The 3 “demons” that haunted legendary scientists
Darwin, Descartes, and Maxwell all believed in these science ‘demons.’
▸
7 min
—
with
Jimena Canales
Harvard professor debunks the biggest exercise myths
Exercise culture is crazy. But what you need to do is exceedingly simple.
▸
with
Daniel Lieberman
Videos
The true story behind Carl Sagan’s cult classic, Contact
Do aliens dream about meeting us, too?
▸
with
Jill Tarter
Up Next
Health
The profound effects of exercise on the brain: A conversation with Dr. John Ratey
The Harvard Medical School’s clinical professor of psychiatry wrote the book on the topic.