Someone who tracks earthquakes for fun noticed it first. On November 11, 2018, a Twitter user going by @matarikipax spotted a weird signal on the U.S Geological Survey’s live seismogram page. The signal had been captured by equipment in Kilimambogo, Kenya. Matarikpax posted an image of it with the message, “This is a most odd and unusual seismic signal.” Then he saw it in data from Zambia and Ethiopia before looking farther away and finding it in Spain, and then eventually in his own corner of the world, Wellington, New Zealand. Other seismic-savvy people soon joined in as the mysterious low-frequency rumble circled the globe for about 20 minutes. It was also detected in Chile, Canada, and Hawaii. Eventually, its source was determined to be about 15 miles off of French archipelago Mayotte, located off Africa between Mozambique and the northern end of Madagascar.

Speaking to National Geographic, Columbia University seismologist Göran Ekström, a specialist in strange earthquakes, says that, “I don’t think I’ve seen anything like it.” Even so, he cautions. “It doesn’t mean that, in the end, the cause… is that exotic.” Even so, it’s got seismologists baffled. 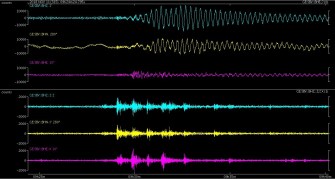 At the top is the simple, unfiltered mystery wave. The bottom shows possible P- and S-wave echoes when the wave was filtered.

What’s so weird about the mystery rumble?

While Mayotte has experienced hundreds of tremors since last May, the strongest, a 5.8 quake, occurred on May 15 and since then they’ve been tapering off in recent months. And there’s been no seismic activity that corresponds to the November wave. Still, the seismology community suspects it’s somehow related to the recent activity off Mayotte.

Normally, earthquakes produce “wave trains” comprised of high-frequency P (for “Primary”) waves that travel in pulses, as well as mid-frequency S (for “Secondary”) waves that wiggle side-to-side. Slow, low-frequency waves such as the mystery rumble are generally produced at the tail end of intense earthquakes, but again, there hasn’t been one anywhere in the right time frame that we know of.

Also, and just as “odd,” is that the wave is monochromatic. Most waves contain a cluster of waves at different speeds, or frequencies, that make for a fuzzy, complicated burst of a waveshape on monitoring equipment. The November wave was comprised of just a single frequency, and appeared as an unusually simple, clean zig-zag of about 17 seconds in length. Helen Robinson at the University of Glasgow, mischievously suggests to National Geographic, “They’re too nice; they’re too perfect to be nature.” It could be surrounding rock is filtering out other waves. Supporting this possibility is that, when the lowest frequencies are filtered out of the waveform, noise appears that could be faint P and S signals are seen. Independent seismologist Anthony Lomax tweeted the following image.

Among the first people to whom @matarikipax reached out was Jamie Gurney, the founder of the UK Earthquake Bulletin, who replied, “First guess would be some kind of meteor air burst, possibly offshore Kenya/Tanzania in the Indian Ocean.” Before lunchtime on the 11th, consensus was gathering around the theory that the global ringing was from a massive phreatic eruption very deep in the ocean. A depth of around 3,000 meters was suggested, although no supporting evidence of such an eruption has yet surfaced. Evidence of an event perhaps similar to this was spotted accidentally by an airplane passenger flying over the Pacific Ocean south of Raoul Island in 2012 — a floating raft of pumice gave it away. While no satellite imagery of the suspect Mayotte location has been examined yet, it’s worth noting that no such weird wave was reported during the Raoul event.

The French Geological Survey (BRGM) is leaning toward the idea that the wave originated in some massive magmatic movement deep underwater. The Mayotte archipelago is volcanic in origin, and the last eruptions are believed to have been 4,000 years ago. Trouble is, “The location of the [Mayotte] swarm is on the edge of the [geological] maps we have,” according to BRGM’s head of seismic and volcanic risk Nicolas Taillefer, speaking with National Geographic. “There are a lot things we don’t know.” As for the Nov. 11 puzzler, “It’s something quite new in the signals on our stations.”

Another possibility, says Ekström, is that it was an unnoticed slow quake, possibly about a magnitude 5. Instead of the characteristic and dramatic snap of a regular earthquake, slow quakes occur over the course of minutes, gradually releasing built-up stress. “The same deformation happens, but it doesn’t happen as a jolt,” says Ekström.

Obviously, the mystery makes seismologist want to know much more about this area of the ocean floor and similarly uncharted undersea locations elsewhere. For now, it’s a very intriguing riddle.

“Depending on what field and what time in history, 99.9 percent of the time, it’s ordinary, or noise, or a mistake, and 0.1 percent, it’s something. But that’s just the way it goes. That’s the way it should go. That’s scientific advance.” — Anthony Lomax

Canadian healthcare system shows how much money America could save