It was definitely an odd story Rosario García González told in the summer of 2010.

González is an elder of the indigenous Cucapah community in Baja, California/Mexico. He and his wife were in their trailer in Paso Inferior, about 12 miles south-southwest of Mexicali when they heard and felt the distinct, powerful rumble of earthquake moving across their valley. Looking outside, they watched as a cloud of light-colored dust was thrown up into the air along a path going in the opposite direction, as if a truck was retracing the earthquake’s path. Except there was no truck.

It’s not that scientists didn’t believe González’s story — they just couldn’t figure out what he saw. Could an earthquake possible boomerang? The answer appears to be yes. A new study of seismic data has found clear evidence of another boomerang earthquake — technically a “back-propagating supershear rupture” — that shot back and forth deep beneath the Atlantic Ocean in 2016. 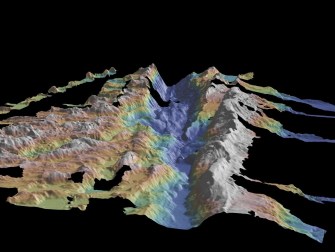 The research was conducted by scientists from the University of Southampton and Imperial College, London in the U.K. First author Stephen Hicks of Imperial College says, “Whilst scientists have found that such a reversing rupture mechanism is possible from theoretical models, our new study provides some of the clearest evidence for this enigmatic mechanism occurring in a real fault.”

The 2016 magnitude 7.1 quake occurred along the Romanche fracture zone — this is a 559 mile-long fault line near the Atlantic equator, about 650 miles west of the coast of Liberia.

Speaking to National Geographic, Hicks recalled the discovery of what at first seemed like a pair of pulses, which closer examination indicated might actually be two phases of the same quake. If so, the quake zipped eastward, and then west. “This was a weird sort of configuration to see,” he says. Confirmation of the boomerang was provided by Ryo Okuwaki of Japan’s University of Tsukuba via the identification of seismic echoes from the distant event.

“Even though the fault structure seems simple, the way the earthquake grew was not, and this was completely opposite to how we expected the earthquake to look before we started to analyse the data,” admits Hicks.

When modeled, the data collected by 39 seismometers arrayed along the bottom of the ocean-floor gash depicted a temblor that moved rapidly in one direction before suddenly turning around and going back in the other at a blistering 11,000 miles per hour. This likely caused seismic waves to pile up similarly to what happens with air-pressure waves trigger a sonic boom, significantly magnifying the quake’s power. 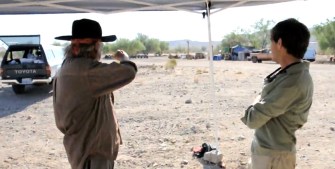 While it’s logistically simpler to record and study earthquakes on land thanks to the availability of seismometer networks, land-based temblors tend to track complex fault systems, with geological slips occurring in a series like falling dominoes. Sea-bottom quakes appear to be simpler, making it easier to discern their underlying mechanisms and travels.

Only a few boomerang quakes have ever been recorded, and examples of them on land are virtually nonexistent, making accounts such as González’s that much more valuable. Clearly, quakes that double back on themselves stand to do considerably more damage than one-way shakers, allowing more outward propagation of destructive seismic waves in the direction of travel, an amount that would be doubled in a boomerang. Seismologist Kasey Aderhold tells National Geographic that “studies like this help us understand how past earthquakes ruptured, how future earthquakes may rupture, and how that relates to the potential impact for faults near populated areas.”

Scientists developing computer models aimed at predicting seismic events haven’t thus far been able to create worthy simulations of boomerang quakes, so the details provided the U.K. researchers provide some of the best information yet collected on these geologic oddities.

Tags
boomerangearthquakegeologynatural disasteroceansscience
In this article
boomerangearthquakegeologynatural disasteroceansscience
Related
The Past
Here is the most terrifying pterosaur ever discovered
Meet your new flying nightmare: Thapunngaka shawi.
The Well
The 3 “demons” that haunted legendary scientists
Darwin, Descartes, and Maxwell all believed in these science ‘demons.’
▸
7 min
—
with
Jimena Canales
Harvard professor debunks the biggest exercise myths
Exercise culture is crazy. But what you need to do is exceedingly simple.
▸
with
Daniel Lieberman
Videos
NASA astronaut explains humanity’s trajectory to Mars
The first human that isn’t an Earthling could be in our lifetime.
▸
5 min
—
with
Robert Curbeam
Videos
Are you developing Alzheimer’s?
Only 2% of Alzheimer’s is 100% genetic. The rest is up to your daily habits.
▸
9 min
—
with
Lisa Genova
Up Next
Neuropsych
Viewing abstract art causes notable cognitive changes
Viewing art that doesn’t look like anything makes your brain take extra steps to try and get it.