Researchers at the Large Hadron Collider at CERN have just discovered a particle that sheds an intriguing new light on the standard model of physics’ strong force. One of the researchers, Paul Soler, describes the discovery as opening “a new frontier in understanding the strong force.”

The strong force was proposed to explain something that seemed like it should happen but doesn’t. Atomic nuclei are largely made up of particles called “hadrons”: neutrons and protons, and electrons, each of which has a characteristic electrical charge. Protons are positive, electrons are negative, and neutrons are neutral. But why don’t positively charged protons repel each other and cause nuclei to fly apart? A force, the “strong” force, must be holding them together.

Since that original finding, it’s been discovered that the strong force also holds together the smaller particles, quarks, from which protons and neutrons are constructed. (Electrons are comprised of another particle type, leptons.)

Protons and neutrons are made up of baryons, sets of three quarks containing light quarks, along with, at most, one heavy quark.

In July 2017, LHC researchers announced at the EPS Conference on High Energy Physics in Venice the detection of a new kind of baryon they’ve named “Ξcc++” (pronounced Ksi-C-C-plus–plus) as part of the Large Hadron Collider “beauty” experiment (LHCb) looking at the moments just after the Big Bang. The baryon contains two heavy “charm” quarks and a single, light “up” quark. (There are six kinds of quarks.) It’s got a mass of 3621 MeV, four times heavier than the proton, no doubt due to its double charms. 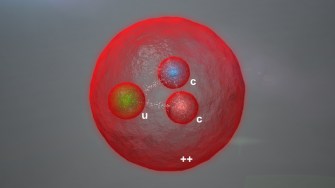 This is the first baryon unequivocally detected that has two heavy quarks, and what’s so intriguing about this is how they interact, and what it may reveal about the strong force. Guy Wilkinson of Oxford University explains:

“In contrast to other particles of this type, in which the three quarks perform an elaborate dance around each other, a particle with two heavy quarks is expected to act like a planetary system, where the heavy quarks are like two stars orbiting one around the other, with the lighter quark orbiting around this binary system.”

LHCb spokesman Giovanni Passaleva tells phys.org, “Finding a doubly heavy-quark baryon is of great interest as it will provide a unique tool to further probe quantum chromodynamics, the theory that describes the strong interaction, one of the four fundamental forces. Such particles will thus help us improve the predictive power of our theories.” The researchers also anticipate finding more double-charmed baryons.

Philosophers and scientists spent millennia arguing about the nature of light. It turned out to be stranger than anyone imagined.
Hard Science

Surrounding Earth is a powerful magnetic field created by swirling liquid iron in the planet’s core. Earth’s magnetic field may be nearly as old as the Earth itself – and […]
Hard Science

This everyday electrical phenomenon had no widely accepted scientific explanation — perhaps, until now.
Up Next
Hard Science