This camera takes colossal digital pictures. It would take 378 4K ultra-high-definition televisions to display just one of them at full size. So what kind of test picture might one take with such a beast? Well, a head of broccoli, of course.

The world’s largest digital camera for astronomy captures 3,200-megapixel images. It’s destined to photograph panoramic views of the night sky in unprecedented detail for the Legacy Survey of Space and Time (LSST) database at the Vera C. Rubin Observatory in Chile, 8,700 feet above sea level atop Cerro Pachón. Right now, people at the Department of Energy’s SLAC National Accelerator Laboratory are finishing up its construction. The exquisitely detailed broccoli portrait was taken in January 2020 as a test of the camera’s focal plane.

Everyday produce notwithstanding, project manager Vincent Riot says that, “this is a huge milestone for us. The focal plane will produce the images for the LSST, so it’s the capable and sensitive eye of the Rubin Observatory.” 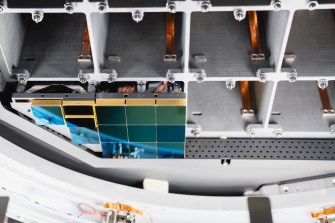 One CCD raft in place, plus a smaller non-imaging raft to its left.Credit: SLAC National Accelerator Laboratory

The tech involved in the focal plane is incredibly sophisticated and its assembly is downright harrowing.

The sensors that capture 16-megapixel images in high-end digital cameras are called charge-coupled devices, or CCDs. (Our phones and tablets instead use CMOS sensors.) The LSST camera contains 189 CCD sensors. The sensors are arranged into 21 squares of nine CCDs each — each square is called a “science raft.” The 2-foot-tall, 20-pound rafts are mounted in a grid inside the camera. This all adds up to 3.2 billion pixels, each of which is tiny at 10 microns in size, about a tenth of the width of a human hair.

As you might expect, assembling such sophisticated hardware is not for the faint of heart. The rafts must be precisely positioned in the grid so that they’re separated by a width equivalent to just five human hairs. If they touch they crack, and down the drain goes $3 million per raft. The SLAC team practiced the assembly operation for a year before the six-month assembly process commenced.

The camera will be worth the effort.

The flatness of its giant focal plane — over 2 feet wide, as opposed to 1.4 inches in a consumer camera — will allow it to capture images of the heavens about 40 moons across. Zoomed in, the team says an image it produces will be so clear it will be like seeing a golf ball from 15 miles away. The camera will also be highly sensitive to dim objects, so it will be able to take pictures of things that are more than 100 million times dimmer than what we can see with our eyes — it’s comparable to being able to see a candle from 1,000 miles away. Project scientists Steven Ritz sums it up: “These specifications are just astounding.”

Once assembled, the focal plane was put inside a custom-built cryostat for cooling — the required operating temperature is -150° F. 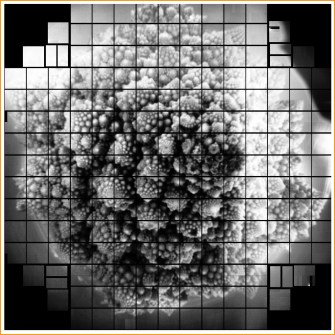 Broccoli’s surface is packed with tiny details, making it a sensible candidate for testing out the focal plane. The camera housing hasn’t yet been completed, so the scientists created a pinhole device that projected the broccoli’s image onto the focal plane.

The man in charge of assembling and testing the LSST focal plane is Aaron Roodman, who says that “taking these images is a major accomplishment. With the tight specifications we really pushed the limits of what’s possible to take advantage of every square millimeter of the focal plane and maximize the science we can do with it.”

Next up for the SLAC team is moving the cryostat/focal plane structure into the actual camera body along with the camera’s lens assembly, which is also remarkable — it’s the world’s largest optical lens. The three-lens array was built by Ball Aerospace and Arizona Optical Systems and (carefully) driven 17 hours from Boulder, Colorado to SLAC ‘s Menlo Park, New Jersey facility.

“Nearing completion of the camera is very exciting,” says JoAnne Hewett, SLAC’s chief research officer. “And we’re proud of playing such a central role in building this key component of Rubin Observatory.”

The LSST camera’s mission is to take one complete, incredibly detailed panoramic image of the Southern sky per day for 10 years. Adds Hewett, “It’s a milestone that brings us a big step closer to exploring fundamental questions about the universe in ways we haven’t been able to before.”

Tags
astronomycosmossciencespacespace cameratechnologytelescopes
In this article
astronomycosmossciencespacespace cameratechnologytelescopes
Related
Life
“I went to space and discovered an enormous lie”
What astronaut Ron Garan saw in space changed his life forever – here’s what it taught him.
▸
8 min
—
with
Ron Garan
Why geniuses hunt demons for sport
Jimena Canales shares the “demons” that shaped computer science.
▸
6 min
—
with
Jimena Canales
Hard Science
10 paradoxes that will stretch your mind
From time-traveling billiard balls to information-destroying black holes, the world’s got plenty of puzzles that are hard to wrap your head around.
The Well
The 3 “demons” that haunted legendary scientists
Darwin, Descartes, and Maxwell all believed in these science ‘demons.’
▸
7 min
—
with
Jimena Canales
Harvard professor debunks the biggest exercise myths
Exercise culture is crazy. But what you need to do is exceedingly simple.
▸
with
Daniel Lieberman
Up Next
Health
8 must-read books on the psychedelic experience
Psychedelics are going mainstream. Here’s your reading list.