Life on Earth would not be possible without a key ingredient that came from an extraterrestrial source, claims new research. Scientists identified that phosphorus, an important component for life, was created in outer space and delivered to Earth by comets or meteorites in the first billion years of the planet’s existence. Once here, phosphorus compounds got incorporated in biomolecules which can be found in the cells of all living creatures on Earth.

Phosphorus, specifically as the derivative phosphates, is essential in the creation of DNA and cell membranes as well as the functioning of other major cellular processes. It’s also necessary for the creation of bone and teeth. Needless to say, it’s a big deal for us, humans. Yet, relative to its importance in biology, it is the least abundant element cosmically.

According to Cosmos Magazine, phosphorus is believed to have formed in supernovas, amid exploding stars. It spread to gas and dust from which new stars and solar systems were condensed. But to become a phosphate, the element had to go through a transformation, which the researchers say likely happened in interstellar dust clouds, courtesy of the chemical phosphine, derived from phosphorus. Tantalizingly, this chemical can also be found in the atmospheres of Jupiter and Saturn, and also in the gas jets from the comet 67P/Churyumov-Gerasimenko – explored in 2014 and 2016 by the Rosetta probe. 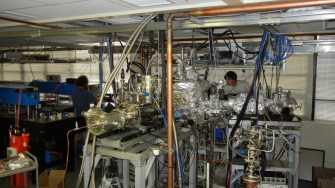 Surface science setup in the University of Hawaii’s Manoa’s W.M. Keck Research Laboratory in Astrochemistry that carried out the experiment.

Credit: University of Hawaii at Manoa.

To probe the mystery, the researchers could not work with phosphine directly as it’s highly toxic. So they used an ultra-high vacuum chamber that was cooled to 5K (-450°F) and recreated interstellar icy grains. After coating the grains with carbon dioxide, water, and phosphine, and exposing them to ionizing radiation that simulated cosmic rays you’d find in space, the scientists found that various phosphate-like chemicals like phosphoric acid and diphosphoric acid were formed. These chemicals are crucial building blocks in molecular biology.

“On Earth, phosphine is lethal to living beings,” said Turner. “But in the interstellar medium, an exotic phosphine chemistry can promote rare chemical reaction pathways to initiate the formation of biorelevant molecules such as oxoacids of phosphorus, which eventually might spark the molecular evolution of life as we know it.”

Check out the new study “An Interstellar Synthesis of Phosphorus Oxoacids”, published in the Nature Communications magazine.

Want to see what it’s like to live on the comet 67P/Churyumov-Gerasimenko? Watch this video from the Rosetta probe:

Tags
aliensastrophysicschemistrycosmosdnaesaextraterrestrialingredient for lifelife on earthmicrobiologyrosetta probeuniversity of hawaii at manoa
In this article
aliensastrophysicschemistrycosmosdnaesaextraterrestrialingredient for lifelife on earthmicrobiologyrosetta probeuniversity of hawaii at manoa
Related
The Past
How the death of alchemy gave birth to modern science
Far from practicing witchcraft, the experimentation of medieval alchemists helped bring about the Scientific Revolution.
13.8
Why stars never collide and galaxies always do
We only need two numbers to understand why.
The Present
Top 10 most popular stories on Big Think in 2022
These were the stories you clicked on the most.
Hard Science
What dead whales can teach us about finding aliens on Mars
Dead whales inspire a way to find extraterrestrial life on Mars.
The Future
Gallium: The liquid metal that could transform soft electronics
Bend it. Stretch it. Use it to conduct electricity.
Up Next
Surprising Science
Study: How to give up your cake and eat it too
A new study shows how reciprocal generosity can benefit you.