Today, Jim Allison is a name to be reckoned with throughout the scientific world — a 2018 Nobel Prize winner for discovering the immune system’s role in defeating cancer —[…]
Go to Profile 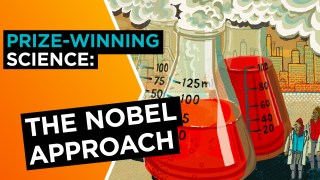 Prove or disprove: A Nobel Prize winner’s approach to science

Whether the data prove you right or wrong, it's crucial to ask: what else is it telling me?
▸
2 min
—
with
Jim Allison
DocLands presents Jim Allison: Breakthrough (Official Trailer)www.youtube.com

JIM ALLISON: The beautiful thing to me about the scientific method is as you said you pose up – there's a problem. You don't know the answer. You don't know how it works. You say I think it's this. And then you design experiments to test that and so the story goes. If the experiment supports it, fine. If it doesn't you reject that but very rarely does it work that way. Most of the time it doesn't really give you – well sometimes it does. Sometimes it gives you sort of an answer and you sort of understand it. Anyway, you keep going down. But at the end of the day that's essentially how it works. The part that's left out of that is that you can't ever really prove anything that way. You can design experiments that give you an answer that's consistent with your hypothesis. But it may also be consistent with another hypothesis and that's what you've got to do. Or even the opposite of your hypothesis.

So another way of looking at it that I do – and I teach everybody in my lab to the idea that you can prove something with science, just get rid of that. All you can do is fail to disprove. And if you try as hard as you can to disprove your hypothesis and you can't and nobody else can either then probably it's right maybe. We'll see. But that's what it is is getting rid of that ambiguity that allows you to really get someplace. And to do that is hard and it takes a long time. But you've got to just look at your data and you can't just say I'm going to look at it and it's told me this or it's told me this about my hypothesis.

Most of the time you'll get a partial answer but there's some answers in there and you need to just say what else is it telling me. That's what I try to teach people. Don't just say oh, it's this or this now and let's move on. No, you say what's there. What's the data. What is the data really. Look at every facet of that. Look at it like it's a stone and you hold it up and you look at it this way and you look at it that way and get everything out of it that you can. Then experiments come from that. That's the fun of it.