The Nobel Prize for Physiology (or Medicine) was announced on Oct. 2 in Sweden. Three American scientists jointly took home this prestigious award for their work on circadian rhythms. This is the biological clock all organisms have which controls our sleep-wake cycle, the release of hormones at important intervals, body temperature, blood pressure, and other critical mechanisms, in order to maintain homeostasis or balance.

All life seemingly has an internal clock, set to fall in line with the rotation of the Earth. This internal mechanism helps life adapt as well to changing aspects of the day and environment. Jeffrey C. Hall, Michael Rosbash, and Michael W. Young are the three newly dubbed Nobel laureates. Hall and Rosbash are from Brandeis University in Boston, while Young hails from Rockefeller University in New York City.

Hall is 72 years old, Rosbash 73, and Young 68. The three will split the $1.1 million prize money this December. Officials at the Swedish Royal Academy of Sciences made the announcement at The Nobel Assembly at Karolinska Institutet in Solna, Sweden.

We’ve known of these rhythms for a long time. Astronomer Jean Jacques d’Ortous de Mairan in the 18th century was the first to show the existence of a biological clock. He proved that mimosa plants, even when plunged into total darkness, still carried on processes in a 24-hour cycle. Soon, similar rhythms were found in other organisms. Basically, Hall, Rosbash, and Young uncovered the biological mechanism required to synchronize each cell. 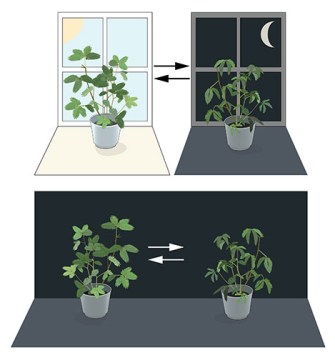 Figure 1. An internal biological clock. The leaves of the mimosa plant open towards the sun during day but close at dusk (upper part). Jean Jacques d’Ortous de Mairan placed the plant in constant darkness (lower part) and found that the leaves continue to follow their normal daily rhythm, even without any fluctuations in daily light. [Image & caption: Nobelprize.org]

The laureates began work on their discovery in 1984. Hall and Rosbash collaborated at Brandeis while Young did his part at Rockefeller. They were all working with fruit flies. Hall and Rosbash discovered a certain protein known as PER. This would build up in the fly’s system overnight and disappear over the course of the day. The protein was found to change significantly over a 24-hour period. So it’s essentially the main driver for the insect’s internal clock. Hall meanwhile isolated what’s known as the period gene which encodes for the PER protein.

Hall found that blocking the period gene disrupts the fly’s internal clock. From there, it was discovered that the gene helps control the PER protein by inhibiting its activity. Seymour Benzer and Ronald Konopka in the 1970s were the first to discover a period gene. But these new laureates found out how such a gene works.

In the fruit flies, the period gene prevents PER from synthesizing, regulating it and keeping the fly’s biological clock synchronized. In 1994, Young went a step further and proved how the PER protein built up overnight again within a cell’s cytoplasm. He found another gene, called timeless, which encodes the TIM protein.

TIM becomes active overnight within the cytoplasm, allowing PER to build up there. Come morning, these two proteins bind together and enter the cell’s nucleus, where PER is incrementally worn away by the period gene, through an impressive feedback loop. By identifying these genes and the proteins that they make, researchers were able to reveal a crucial mechanism at work within all life.

Why is this work so important? 2001 Nobel Prize laureate Sir Paul Nurse underscored that in an interview with The Guardian:

It’s important for the basic understanding of life. Every living organism on this planet responds to the sun. All plant and also animal behaviour is determined by the light-dark cycle. We on this planet are slaves to the sun. The circadian clock is embedded in our mechanisms of working, our metabolism, it’s embedded everywhere, it’s a real core feature for understanding life.

There’s a second reason. We are increasingly becoming aware that there are implications for human disease. With the modern technological age we get more and more divorced from the circadian rhythm, as we are able to travel across time zones and disturb our circadian rhythm. We can now live in light-dark regimes that are nothing to do with the circadian rhythm. This is leading to conditions like jet lag which are disturbing and may in turn also lead to other consequences that we don’t fully understand about the human condition.

To hear about this discovery from Young and Rosbash, click here:

The oldest person in history lived to 122
Up Next

An employee who is motivated and engaged with their work is frequently more productive than their disengaged counterparts—helping to drive success for the business as a whole. According to research […]