Does the universe keep extending endlessly into the abyss of space, or does it have a defined end?

Of all the scientific questions you may ponder, “Is the universe infinite?” is one of the hardest. It is impossible to answer with certainty at this point. Scientists have proposed both possibilities, and each has its own supporters and detractors. Determining whether the universe has some kind of boundary ultimately depends on figuring out its shape, size, and how much of it we can actually observe.

Is the universe infinite? And what shape is it?

The shape of the universe would have a lot to do with its size. Cosmologists have theorized that a universe would likely come in one of three possible shapes, which are dependent on the curvature of space. As described in Discover Magazine, the universe could be flat, having no curvature, but spatially infinite. Or it could be open, shaped like a saddle (with negative curvature) and also infinite. Or it could be closed, look like a sphere, and be spatially finite.

So which shape really is it? Nobel Prize-winning cosmologist John Mather of NASA’s Goddard Space Flight Center, also the chief scientist for the James Webb Space Telescope, maintains that recent observations of cosmic microwave background radiation (CMB) remaining from the time of the Big Bang support the idea of the universe being flat, without any curvature (at least to the limit of what is observable).

“The universe is flat like an [endless] sheet of paper,” shared Mather. “According to this, you could continue infinitely far in any direction and the universe would be just the same, more or less.” 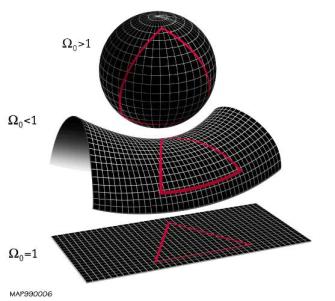 The geometry of the universe is determined by the density parameter Ω within cosmological Friedmann Equations.Credit: NASA / WMAP Science Team

Measuring the size of the universe

That vast amount of space includes anywhere from 200 billion to 2 trillion galaxies, according to varying estimates. And each galaxy has, on average, around a 100 billions stars.

These gargantuan numbers are almost impossible to grasp. How did scientists come up with them?

As shared in an interview with BBC by Caitlin Casey, an astronomer at the University of Texas at Austin, scientists use a variety of tools and methods called “the cosmic distance ladder” to estimate distances between objects in the vastness of space. They start out with distances they can actually measure directly, like through bouncing radio waves off nearby bodies in the solar system, noting the time required for the waves to come back to Earth.

For distances that are harder to gauge, like those for galaxies at the boundary of the universe, astronomers utilize inferences based on calculations and observational evidence.

For instance, they employ “parallax measurement” that relies on measuring a star’s shift in relation to objects in its background, as well as “main sequence fitting,” which takes advantage of our knowledge of stellar evolution. (Stars evolve over time, changing size and brightness.) Knowledge of how brightness is connected to distance is paramount in determining the location of distant objects. So is analysis of redshift, which involves measuring changes in the wavelengths of light coming from faraway galaxies.

What about the unobservable universe?

If you notice, the numbers above pertain to the observable universe, the ball-like part of the universe that can be somehow seen from Earth or detected using our space telescopes and probes. But what about parts of the universe we cannot see? Some portions of the universe may be just too far away for the light emitted after the Big Bang to have had sufficient time to reach us here on Earth.

One study from a group of UK scientists estimated that if you take that into account, the actual size of the universe could be at least 250 times larger. They found that if you refer to space in terms of a so-called Hubble volume, which is similar to the volume of space in the visible universe, a closed and finite universe would contain roughly 250 to 400 Hubble volumes.

Another possibility entertained by scientists like Nobel Prize-winning Roger Penrose is that the Big Bang was just one of the periods of cosmic regeneration that our universe has experienced. There could have been multiple Big Bangs, followed by Big Crunches, periods in which a universe would stop expanding and collapse upon itself.

If all we know about the universe is derived from how it expands after the latest Big Bang, the questions if the universe is infinite or what size it may be are almost moot. As is often the case, more study and confirmation of our theories is needed.

Is there an edge to the universe?

Whether we have a finite universe or an infinite universe like an ever-expanding bubble, does it still have an “edge”? Is there some place you can go and say, “Yep, this is the end of the universe”? The simple answer is likely no.

As explained to LiveScience by Robert McNees, an associate professor of physics at Loyola University Chicago, the universe is isotropic. That means it follows the so-called “cosmological principle” and has the same properties and follows the same laws of physics in all directions.

If that is so, then the universe is much like the surface of a balloon. Imagine being an ant walking along a balloon. You wouldn’t know there’s an edge to it if you kept walking forward. You’d likely come back to where you started eventually, but the journey around and around could keep going without end.

If someone were to blow more air into the balloon as you keep walking along it, you’d experience some parts of the balloon moving farther away from you. Still, you’d be no closer to finding the balloon’s edge.

Much like the ants, we’re unlikely to get to the end of the universe. But we may still be able to answer one day “is the universe infinite” or does it have an actual boundary?

We’ll never be able to extract any information about what’s inside a black hole’s event horizon. Here’s why a singularity is inevitable.
Up Next
Health

The tiny swimmers appear to transmit signals that “persuade” the female body to have a baby.