Few things are worse for your health than long-term sleep deprivation. The sleep deprived have a higher risk of quite a number of conditions including heart disease, hypertension, type 2 diabetes, obesity, and depression. Lack of sleep also has a deleterious effect on the brain, particularly on memory and cognition.

Besides harried work schedules and our obsessions with our smart phones, sleep disorders are prevalent, with 50-70 million American adults experiencing one. Sleep apnea and insomnia are two of the most common examples. The issue has gotten so serious that the CDC has dubbed insufficient sleep a public health problem. 1 in 3 adults don’t get enough sleep, a CDC report last year found.

On a societal level, sleep deprivation accounts for lost productivity, medical errors, and car and industrial accidents. One study showed that medical students doing their residency, which sometimes includes as long as 30-hour shifts, are more prone to mistakes. What scientists didn’t know was why the sleep deprived suffered cognitive lapses, like forgetfulness or slower response time. That is until now. 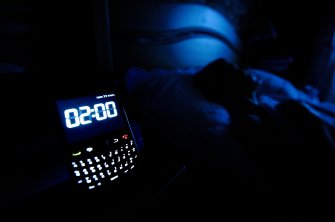 1 in 3 US adults don’t get enough sleep, which affects their health and cognition. Credit: Getty Images.

Dr. Itzhak Fried is a neurosurgeon at UCLA and Tel Aviv University. Along with colleagues, he recently discovered the neural underpinnings of sleep deprivation. The team also showed how such deficiencies lead to cognitive lapses. The authors describe their findings in a new paper published in the journal Nature Medicine. Dr. Fried and his team found that neurons literally can’t function properly when we lack sleep. “This leads to cognitive lapses in how we perceive and react to the world around us,” he said.

The study began with 12 patients who all suffer intractable epilepsy. Each patient was undergoing depth electrode monitoring. This is where a small hole is drilled into the skull and an electrode is placed inside. This is to determine where the seizures are emanating from, with the hope of correcting the issue through surgery.

Sleep deprivation can trigger a seizure. To shorten their stay in the hospital, the patients stayed up all night to evoke one. Researchers asked them several times over the course of the night to identify a number of images as fast as they could. These were six images of celebrities, famous landmarks, and animals. The implanted electrodes meanwhile recorded the combined firing of 1,500 neurons, which includes the brain activity of all 12 volunteers. Specific attention was given to the temporal lobe, responsible for memory and processing sensory information, including visual perception.

This exercise was performed on 24 separate occasions. As the night wore on and patients got drowsier, their ability to name the pictures quickly slowed, as did their neural activity. The neurons fired weakly and transmissions to other parts of the brain moved more slowly. As a result, participant response-time lagged. 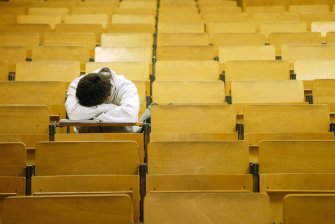 “Slow, sleep-like waves disrupted the patients’ brain activity and performance of tasks,” Fried said in a press release. “This phenomenon suggests that select regions of the patients’ brains were dozing, causing mental lapses, while the rest of the brain was awake and running as usual.” Fried likened sleep deprivation to being drunk. “Yet no legal or medical standards exist for identifying overtired drivers on the road the same way we target drunk drivers,” he said.

When the brain is sleep deprived, information isn’t encoded by neurons as it should be, which is why our reaction time is slowed. It’s like when a sleepy driver misses the fact that a person has stepped into the road. “The very act of seeing the pedestrian slows down in the driver’s overtired brain,” Fried said. “It takes longer for his brain to register what he’s perceiving.” The next phase is to come to understand the mechanism completely. For instance, why do neurons slow down due to sleep deprivation and why is their firing weaker?

The first human that isn’t an Earthling could be in our lifetime.
▸
5 min
—
with
Robert Curbeam
Up Next
Surprising Science

Gene Therapy Gives a Boy with Epidermolysis Bullosa His Life Back