If you’re reading this, you’re probably tired. When it comes to sleep, 40 percent of Americans get less than the recommended seven hours a night. Children and adolescents need even more, and this slumber deficit is costly.

Studies have linked sleep deprivation and deficiency with an increased risk of obesity, diabetes, stroke, heart disease, and high blood pressure. It further strains your brain, degrading your ability to solve problems, control your emotions, and seek gainful decisions over impulsive choices.

The consequences extend beyond the personal, too. Drivers who sleep fewer than seven hours are more likely to be responsible for a car collision, and bad sleep habits are estimated to cost the economy a staggering $434 billion next year.

And we all know what’s to blame. Screen time. 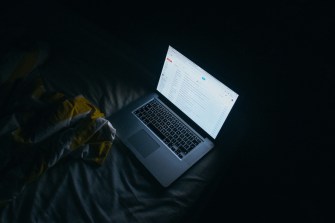 The blue light emitted by laptop and smartphone screens is believed to suppress our brain’s melatonin production and stave off sleepiness.

Our bedtime story so far

Because the human brain evolved in an environment free of lamps and light switches, it learned to recognize bedtime by the spectrum of light that filtered through the atmosphere.

Long wavelength blue light informs our brains that it’s day time. We should be active and alert. The short-wavelength colors of sunset inform our brains it’ll be dark soon. We should mellow out.

When those reds and yellows hit our retina, they signal to the pineal gland that it’s time to produce melatonin. This hormone induces restfulness, reduces alertness, and keeps us sleeping throughout the night. In an environment of fairly consistent sunrises and sunsets, this circadian rhythm has served us well.

Then came screen time. According to the current social consensus, the blue light emitted by screens and LEDs mixes up these natural signals. Our brains register the wavelengths and surmise its still day time. The pineal gland doesn’t receive the signal to produce melatonin, and we remain awake and alert well into the night.

To break this pattern and keep our attention firmly planted on their products, software developers have inundated every screen-brandishing device with a “night mode.” This mode skews the light ratio away from blue and toward the ruddier hues. In theory, we can now watch our umpteenth episode of The Great British Bakeoff well into the night, so long as we don’t mind a slightly off-color kransekake. 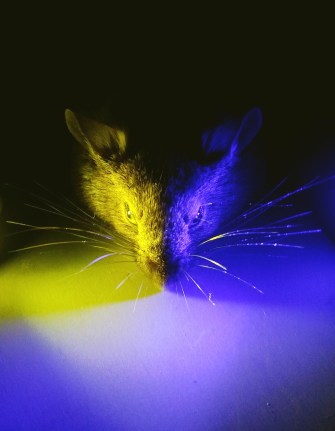 Using lights to change the color without altering the brightness, the researchers determined that blue light had a weaker effect on the mice’s circadian clocks.

Got to get those midnight blues?

However, a recent study published in the journal Current Biology questions that consensus. Dim, cool light, its data suggest, help our circadian clocks register the approach of bedtime better than night mode.

The researchers carried out their experiments on mice. They used specially designed lights that allowed them to change the color without altering the brightness. The long-wavelength blues suppressed circadian light responses, having a weaker effect on the mice’s circadian clocks compared to equivalent shorter-wavelength yellows.

The researchers reasoned that bluer light, like that discharging from unfiltered screens, more closely aligns with the spectral composition of twilight. Conversely, a device’s “night mode” replaces these wavelengths with warmer reds and yellows, which our circadian clocks still associate with daylight.

“We show the common view that blue light has the strongest effect on the clock is misguided; in fact, the blue colors that are associated with twilight have a weaker effect than white or yellow light of equivalent brightness,” Dr. Tim Brown, study author and senior lecturer at the University of Manchester, said in a release.

He points out that current approaches to lessen the screen’s impact on sleep involve changing the ratio of short and long wavelength light with little difference in brightness. But the study suggests that brightness levels are more important, and we should shoot for dim, cool colors in the evening. If your phone’s screen is too bright, the color-spectrum it favors won’t matter.

Brown adds, “Research has already provided evidence that aligning our body clocks with our social and work schedules can be good for our health. Using color appropriately could be a way to help us better achieve that.”

Science in the dark

Which findings should we believe? Do we forego night mode for a dim blue screen, or does night mode work as advertised? Unfortunately, science is in the dark.

Because the Current Biology study used mice, we can’t say the same will hold for humans. Meanwhile, much of the research cited against blue light is based on observational and cross-sectional studies, making causality difficult to discern.

A literature review on the research lists several potential mechanisms that may cause screen devices to damage sleep and deter healthy habits. All are backed by research.

One is psychological stimulation. Players of exciting video games show increased heart rates, slightly delayed sleep-onset, and decreased REM. (Apparently, it’s difficult to wind down after shot-gunning your way through the deepest pits of hell.) But even non-violent media have been shown to induce states of arousal that disrupt sleep patterns—such as the emotional devastation of a stodgy stollen.

Another potential sleep-thieving culprit is time displacement. Poor self-control and unstructured screen habits lead us to replace the time we would otherwise spend sleeping with multimedia.

The review also surveyed the research regarding screen light and sleep patterns. Its authors note that some studies support the view that light-emitting screens suppress melatonin levels and delay sleep, but others have found no changes with evening exposure to light-emitting devices, even in adolescences.

They conclude that it is “impossible to determine whether longer sleep latency or reduced REM sleep duration was due to decreased sleepiness before bedtime, suppression of melatonin, a phase delay of the circadian clock, or a combination of these factors.” Further research on the effects of screen time and sleep, especially on youth, is needed.

But while causality cannot yet be determined, there is an unequivocal and strong correlation between screen time and poor sleep. The review’s authors cite one meta-analysis that merged 20 studies and over 125,000 young participants. It found a consistent pattern that bedtime media usage links with insufficient sleep, poor sleep quality, and daytime sleepiness.

Even as we wait for the science to build its casual case, the path forward is evident. Put down the devices an hour or two before bed, and perform some relaxation techniques or read a good book. Not an ebook.

Tags
braincognitive scienceevolutionhealthmental healthneurosciencephysiologypublic healthsleeptechnology
In this article
braincognitive scienceevolutionhealthmental healthneurosciencephysiologypublic healthsleeptechnology
Related
Thinking
Visual thinking: How to understand the inner lives of animals
Humans are good visual thinkers, too, but we tend to privilege verbal thinking.
The neuroscience of loving music
Humans are musical animals four million years in the making, explained by music expert Michael Spitzer.
▸
8 min
—
with
Michael Spitzer
Neuropsych
How you breathe affects your brain
Your breathing rhythm influences a wide range of behaviors, cognition, and emotion.
Health
What happens when regular porn watchers abstain for a week?
Researchers watched for signs of withdrawal — but didn’t find any.
Neuropsych
Daily caffeine intake temporarily alters your brain structure
Compared to people who took a placebo, the brains of those who took caffeine pills had a temporarily smaller gray matter volume.
Up Next
The Present
No, U.S. Department of Agriculture, Wakanda is not a real country
An online tool listed the home of the Black Panther as a trading partner of the United States.