The United Arab Emirates made history last week by becoming the first Arab nation to send a spacecraft to Mars. It’s also the fifth country to ever reach the Red Planet.

The UAE Space Agency’s Hope Probe entered Martian orbit on February 9. It was a tense moment for the agency. After all, half of all Mars missions fail, and communication delays make it so that the space agencies have to wait about 10 minutes before confirming whether landings or orbital insertions are successful.

To enter orbit, the probe had to slow itself from 75,000 mph to 11,000 mph, an intense move that required the spacecraft to fire Delta V thrusters for 27 minutes straight, burning half of its fuel in the process. A live stream of the event captured UAE Space Agency engineers anxiously awaiting communication with the probe to be restored.

“This has been a remarkable journey of humanity,” UAE Space Agency chairperson Sarah Al Amiri said before the orbital insertion.

After communication was restored, the UAE celebrated the success of its first interplanetary mission. Days later, the UAE Space Agency released its first image captured by the Hope Probe, captured from a distance of about 15,500 miles. 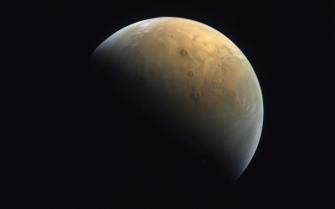 The orbital insertion marks a new phase in the Emirates Mars Mission, which the UAE has been developing since 2014. Using the Hope Probe, the mission aims to capture “a complete picture of the Martian atmosphere,” and: 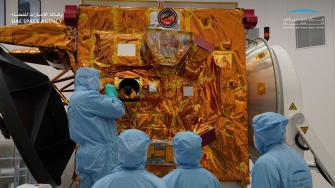 The Hope Probe is one of three spacecraft arriving at Mars this month: China’s Tianwen-1 mission—outfitted with an orbiter, lander and rover—also entered Martian orbit last week, while NASA’s Perseverance rover is set to land on Mars on February 18. All these missions launched in July 2020, taking advantage of an optimal alignment between Earth and Mars that happens once every 26 months.

Although it’s only been about a decade since the UAE launched its first satellite, the nation has ambitious goals. In 2024, the UAE Space Agency plans to send an uncrewed technology lander to land on the moon, where it will study the lunar surface and help UAE Space Agency engineers prepare for future crewed missions. If successful, the UAE would become the fourth nation to land a spacecraft on the moon.

But that’s just a short-term goal. Over the next century, the UAE hopes to establish the first inhabitable settlement on Mars through its Mars 2117 project. The first phase consists of building Mars Scientific City on Earth, which “will comprise laboratories for food, energy and water, agricultural testing and studies about food security in the future,” the UAE stated, adding that a team of scientists and astronauts will live in the simulated environment for one year.

“The landing of people on other planets has been a longtime dream for humans,” Prime Minister Sheikh Mohammed bin Rashid Al Maktoum said in a statement. “Our aim is that the UAE will spearhead international efforts to make this dream a reality.”

We’ll never be able to extract any information about what’s inside a black hole’s event horizon. Here’s why a singularity is inevitable.
Up Next
The Present

Interested in housing and real estate? Get started for only $30