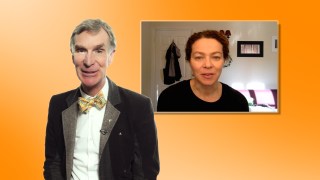 Time is this wild fourth dimension in nature, says Bill Nye. We depend on its neat measurements for survival – but subjectively it continues to elude us.
▸
5 min
—
with
Bill Nye, The Science Guy

Our brains are terrible clocks. An hour can pass like a few minutes, a day can drag on for what seems like two. Because of that, we’re not always sure that time is real – is it just a label we’ve stuck onto the observed patterns of our universe? We can’t see, feel, or hear time, we can only see its effect on us and on things over the course of our lives. Bill Nye believes its both subjective and objective – there is something definitively measurable to time, and yet it’s so mysterious to our brains. Nye thinks (or hopes) that in his lifetime, a new discovery will be made about the nature of time and space-time that gives us some more answers about this curiosity-inducing fourth dimension. Bill Nye’s most recent book is Unstoppable: Harnessing Science to Change the World.

Bill Nye: Alicia, that is fantastic. Notice that in English we don't have any other word for time except time. It's unique. It's this wild fourth dimension in nature. This is one dimension, this is one detention, this is one dimension and time is the fourth dimension. And we call it the fourth dimension not just in theoretical physics but in engineering. I worked on four dimensional auto pilots so you tell where you want to go and what altitude it is above sea level and then when you want to get there. Like you can't get there at any time. We have a whole bunch of other words. We have appointments. We have morning, afternoon, evening, noon time. We have a whole bunch of words describing periods of time, but when it comes to actual time we just have this one word it's a strange and surprising thing.

So, we work very hard to measure time with all sorts of extraordinary clocks, but there is no question with our brains, which are wet chemical computers, we lose track of time. Sometimes it feels short, sometimes it feels long and it's just the nature I think of being constrained by measuring time with our brains. This is why we build instruments to measure time outside of ourselves externally. But it is a great question. And then the whole idea of science really started with this thing people used to call natural philosophy. And when you throw in the word philosophy for me you start asking this question like can you know anything, let alone what time it is or how long it's been since something happened or when something will happen in the future or whether or not it will happen at all, these are philosophical questions. I feel that you can get yourself pretty spun up in saying to yourself there's no way to know anything. Philosophically you can't know anything. On the other hand, it seems to me we can know a great deal objectively about nature and that includes time and it's passage.

One last thought Alicia, when I think about my grandfather he had no idea, no understanding of relativity. Not because he was a bad person, because no one had discovered it yet. And so I just wonder what else it is about the nature of time or the nature of what physicists, astrophysicists like to call space time where you talk about these four dimensions at once X, Y, Z, and T. I cannot help but wonder there is something else undiscovered about time and perhaps you and I will be alive, not much more time will have passed before this discovery is made. Carry on. Excellent question. Thank you.

On the Origins of Genius: How Human Consciousness Evolved