It’s not often that Mona Sirbescu, a professor of geology at Central Michigan University, has actually had someone come in with what they thought was a meteorite, and then found it to be true. In fact, this is the only time it’s happened to her.

People bring things there frequently, and they’re never meteorites. However, a man named David Mazurek showed up recently with a specimen that proved be the the bonafide thing. “For 18 years, the answer has been categorically ‘no,’ meteor wrongs, not meteorites,” Sibescu quipped in a statement from CMU on Thursday.

Weighing in at 22.5 lbs., and made of 88.5 percent iron and 11.5 percent nickel, Mazurek’s rock is only the 12th actual meteorite to be identified in the state. “I could tell right away that this was something special,” Sibescu said. “It’s the most valuable specimen I have ever held in my life, monetarily and scientifically.”

The Smithsonian, in Washington, D.C., has confirmed that it is an actual meteorite. 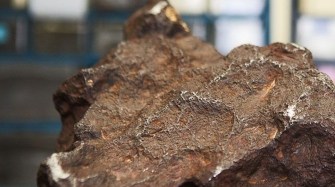 It has quite a story behind it. You see, the meteorite (remember that meteors disintegrate before entering or while entering our atmosphere, while meteorites are the ones that make it all the way to Earth’s surface) landed on some farmland in a town called Edmore, Michigan, in the 1930s.

Apparently, according to the old farmer who lived there, it made quite a racket. When he and his sons dug it up the next day from the crater, it was still warm. The meteorite was sold with the farmhouse to Mazurek about 30 years ago, who then moved on a few years later, bringing the “rock” with him. When it wasn’t being used as a door stop, it was something that his kids would take to school for show-and-tell. 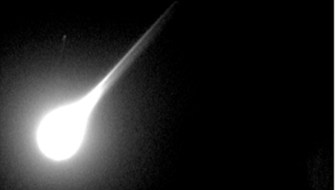 Now dubbed the Edmore meteorite, it’s likely to end up in one museum or another. “What typically happens with these at this point is that meteorites can either be sold and shown in a museum or sold to collectors and sellers looking to make a profit,” Sirbescu said.

Both the Smithsonian and a mineral museum in Maine are considering purchasing the meteorite for display. If it sells, Mazurek has decided to give 10 percent of the sale value to Central Michigan University for the study of earth and atmospheric sciences.

Sirbescu, though, seemed more impressed with its other qualities. “Just think, what I was holding is a piece of the early solar system that literally fell into our hands,” she said.

Tags
central michigan universityedmoremeteormeteoritemichiganspace
In this article
central michigan universityedmoremeteormeteoritemichiganspace
Related
Life
“I went to space and discovered an enormous lie”
What astronaut Ron Garan saw in space changed his life forever – here’s what it taught him.
▸
8 min
—
with
Ron Garan
Videos
The true story behind Carl Sagan’s cult classic, Contact
Do aliens dream about meeting us, too?
▸
with
Jill Tarter
Videos
NASA astronaut explains humanity’s trajectory to Mars
The first human that isn’t an Earthling could be in our lifetime.
▸
5 min
—
with
Robert Curbeam
How Earth’s 23.4° tilt makes life beautiful
Rituals come as much from religion as they do from the way Earth spins around the Sun.
▸
4 min
—
with
Sasha Sagan
Videos
Michio Kaku: “We need a second planet”
Humans won’t survive if we stay on Earth. Michio Kaku explains.
▸
7 min
—
with
Michio Kaku
Up Next
Health
LaCroix contains ingredient ‘used in cockroach insecticide,’ lawsuit alleges
The lawsuit might be right in disputing LaCroix’s “all-natural” claim, but fans of the sparkling water probably don’t have much to worry about.