A meteorite that blasted through the night sky over Michigan and crashed into a frozen lake had another surprise in store. A new study found that it contained 2,600 “pristine” organic compounds of extraterrestrial origins and can provide clues about the beginning of life on our planet.

Researchers employed weather radar to track down the pieces of the space rock that landed on Strawberry Lake by Hamburg, Michigan on January 16, 2018. The meteorite hunters were able to gather up the scattered parts before they changed their chemical constitution by being exposed to liquid water.

The paper’s lead author, Philipp Heck, a curator at the Field Museum and associate professor at the University of Chicago, shared that the meteorite was unique in that it fell onto a frozen lake and was quickly found. That kept it as close to how it was in space as we could hope.

“We could see the minerals weren’t much altered and later found that it contained a rich inventory of extraterrestrial organic compounds,” said Heck. “These kinds of organic compounds were likely delivered to the early Earth by meteorites and might have contributed to the ingredients of life.”

Meteor flashes across the sky in Michiganwww.youtube.com

Where did the meteorite come from in the first place? The scientists think it broke off from an asteroid that was orbiting between Mars and Jupiter. While it started as a 6-foot rock above Earth, the part of it that hit the ground was just the size of a peach pit.

As it got to Michigan, the scientists tracked the meteorite with NASA’s weather radar, which can detect hail and rain. “These pieces of meteorite fell into that size range, and so weather radar helped show the position and velocity of the meteorite,” explained Heck. This resulted in the meteorite being quickly located. It took meteorite hunter Robert Ward just two days to find the first piece of the celestial intruder on the frozen surface of the lake. 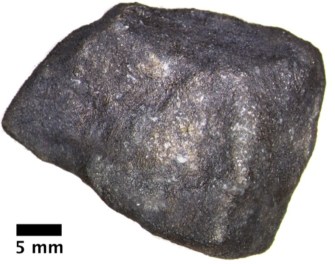 The finding of organic materials on the meteorite is certainly not quite like coming upon a full-fledged alien, but the presence of carbon-containing compounds supports the theory of panspermia. It proposes that ingredients necessary for life are spread throughout the Universe by such space rocks.

Check out the new paper in Meteoritics & Planetary Science.

Tags
biologycosmosextraterrestrialnasapanspermiaplanetsspaceuniverse
In this article
biologycosmosextraterrestrialnasapanspermiaplanetsspaceuniverse
Related
The Universe in 90 minutes: The Multiverse, time, free will, God, & more
Everything you ever wanted to know about the Universe, explained by physicist Sean Carroll.
▸
1:33:47 min
—
with
Sean Carroll
Life
“I went to space and discovered an enormous lie”
What astronaut Ron Garan saw in space changed his life forever – here’s what it taught him.
▸
8 min
—
with
Ron Garan
Thinking
Lobsters don’t die from old age — they die from exhaustion
Being mortal makes life so much sweeter.
Videos
The true story behind Carl Sagan’s cult classic, Contact
Do aliens dream about meeting us, too?
▸
with
Jill Tarter
Videos
NASA astronaut explains humanity’s trajectory to Mars
The first human that isn’t an Earthling could be in our lifetime.
▸
5 min
—
with
Robert Curbeam
Up Next
Starts With A Bang
The World Needs Nuclear Power, And We Shouldn’t Be Afraid Of It
As we embrace green solutions, nuclear should absolutely be part of the equation.For thousands upon thousands of years, humans have been harnessing the power of nature to provide energy to […]