One might imagine that history of the universe is a gradual fading out, that the Big Bang was incredibly bright and dense and gradually everything dispersed and dimmed until the small pinpricks of distant stars and galaxies distributed to where we see them in our sky today. This idea, however, isn’t entirely accurate. The universe has gone through several dramatic changes. For example, after the Big Bang, the universe was a very dark place until the first stars “turned on” during a period called the Epoch of Reionization. Now, new research published in the Monthly Notices of the Royal Astronomical Society shows that the early galaxies during this period were extraordinarily bright, providing clues to how we came to find stars in our sky.

Soon after the Big Bang, there were no stars, galaxies, or really anything you could refer to as an object. Instead, there was a miasma of hydrogen gas. It took a long time for gravity to gather enough gas together to form stars — about 200 million years after the Big Bang — but even once that happened, the universe was still relatively dark.

One would think that once stars had formed, the universe would have emerged from its so-called dark age, but much of the light spectrum was blocked by the omnipresent hydrogen gas that existed in the universe at this time. Forms of light with long wavelengths like radio waves and visible light could pass through this gas unencumbered, but shorter, more energetic forms of light like UV light, X-rays, and gamma waves were blocked. This is because the hydrogen gas was neutral, meaning it carried no electrical charge. High-energy waves of light would strike the neutral hydrogen atoms and be blocked by them, stripping them of their electrons in the process. This is known as ionization.

Ionized hydrogen allows much more light to pass through it. Today, the universe is filled with ionized hydrogen, though it is much less dense than it used to be. But this transition is still something of a mystery. What could have produced all of this ionizing radiation? Lead study author Stephane De Barros called this “one of the biggest open questions in observational cosmology. We know it happened, but what caused it? These new findings could be a big clue.” 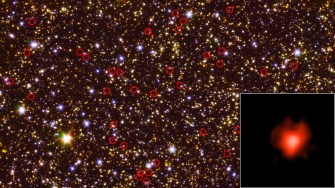 This deep-field view of the sky is dominated by galaxies circled in red. The bottom right inset shows the light collected from one of those galaxies during a long-duration observation.
NASA / JPL-Caltech / ESA / Spitzer / P. Oesch / S. De Barros

Using the Spitzer telescope, the research team collected data from two regions in the sky for over 400 hours. Because light can only go so fast, looking at very distant objects is the same as looking at those objects in the past: What we see in our telescopes is the result of light that has taken, in some cases, billions of years to reach us. Through Spitzer, the research team was able to observe very distant galaxies from 13 billion years ago, right at the end of the Epoch of Reionization.

Specifically, the team observed 135 galaxies, and they found specific wavelengths of infrared light that are produced when ionizing radiation interacts with hydrogen and oxygen gas, the kind of activity that would be going on during the Epoch of Reionization. Surprisingly, this light was far brighter than expected; these early galaxies were spewing out an astounding amount of ionizing radiation, contributing to the transformation of the universe to how it appears today. This study suggests that these extra-bright galaxies (which outshine current galaxies by far) were the norm during this period.

The fact that Spitzer was capable of observing these distant and ancient galaxies was itself a surprise, considering it’s only about 33 inches in diameter. While Spitzer is an admirable instrument, it’s important to note that any tool used to look this far back into the past will be subject to a lot of error. The researchers tried to account for the many variables that could affect their analysis, like the impact of nebulae and dust grains.

The James Webb Space Telescope is scheduled for launch on March 30th, 2021, and its capabilities will blow Spitzer out of the water. Similar to this work, Webb’s job will be to look at some of the most distant and ancient objects in the universe. While Webb will be tuned to observe many of the same wavelengths as Spitzer, it will be about 7.5 times larger. Using research such as this, scientists hope to gain insight into how these super-bright galaxies formed and even how the first galaxies ever came to be.

Will choosing between too many presidential candidates paralyze voters?

With the seemingly endless growth of the Democratic primary field, we may suffer from choice overload. The result? In fear of making the wrong choice, we may fail to make any — i.e., don’t vote.