It’s a ready-made sci-fi trope: Authorities discover an asteroid racing toward the earth on track to wipe out everything we hold dear. Plus us. In the midst of the panic, an unusually attractive, resolute nobody grabs the public’s attention: “I have an idea so crazy it just might work. We can fire a rocket at the demon rock and maybe, just maybe, knock it off course and save the Earth.” Cue the popcorn and two hours of your life you’ll never get back.

But maybe the hero’s crazy idea could work. Of course, you wouldn’t want to wait until it has to work to find out. So that’s exactly what an international group of 130 scientists tasked with developing our planetary defenses have resolved to do: They’re making plans to fire a spacecraft at a distant object to see if the kinetic impact can change its trajectory.

The AIDA project is a collaboration between NASA and the ESA (European Space Agency). “AIDA” is short for “Asteroid Impact and Deflection Assessment.” In September, participants met to hash out the details in Rome. ESA’s Ian Carnelli explains why: “Today, we’re the first humans in history to have the technology to potentially deflect an asteroid from impacting the Earth. The key question that remains to be answered is, are the technologies and models that we have good enough to actually work? Before you drive a car, you need to have an insurance policy. Well, AIDA is the insurance policy for planet Earth.”

The project actually involves two phases: The DART spacecraft will crash into an asteroid, and Hera will follow a few years later to assess the results. 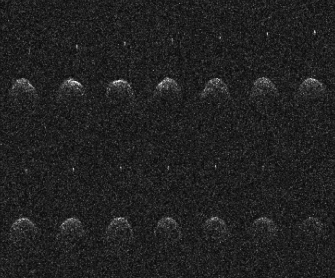 NASA is in charge of DART, or “Double Asteroid Redirection Test.” In July 2021, the DART satellite, a half-ton chunk of metal, will be launched toward a known asteroid, 65803 Didymos, which is actually a binary object comprised of its main, larger 780-meter body and a smaller, 160-meter moonlet, AKA “Didymoon,” that orbits it. It’s Didymoon that’s DART’s target.

“[Didymos] is not on a path to collide with Earth,” says Nancy Chabot, director of the mission, “and therefore poses no current threat to the planet, but its binary nature enables DART’s kinetic impactor demonstration.” It presents an opportunity to test DART and measure its effect in a controlled way since it will hit a satellite already in orbit around another object. In addition, Didymoon will be visible from ground telescopes as it passes in front of and behind the larger body.

The vehicle carrying DART will utilize two new acronymed technologies. One is a solar electric propulsion system first deployed during the decade-old Dawn mission to study protoplanets Vesta and Ceres. This system is called NEXT-C, or “NASA Evolutionary Xenon Thruster-Commercial.” The other innovation is a new spacecraft-guidance algorithm called SMART-Nav, for “Small-body Maneuvering Autonomous Real-Time Navigation.” Hitting such a distant target is no small matter, says Chabot: “One of DART’s main challenges is to reliably target and squarely impact the small moonlet, 6.8 million miles away from Earth.”

After a 16-month journey, in September 2022, just before hitting Didymoon, DART will release a small camera-bearing cubesat from Italy, the LICIACube, which will capture images of the 14,700 mph collision.

Just a slight alteration of the moonlet’s path — even a fraction of a degree — will be enough to verify DART’s success. 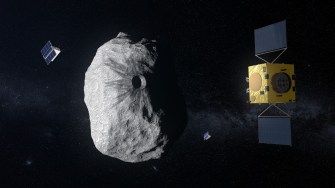 Two years after DART, the ESA’s Hera will take off for a journey to Didymos that won’t reach its destination until 2028. It’ll have an autonomous navigation system onboard to help it reach the asteroid whose orbit will hopefully have changed a little by then, thanks to DART.

Hera contains a pair of cubesats, one of which will map the impact area on Didymoon using a high-resolution camera, LIDAR, and a thermal imager as the craft orbits the asteroid. The other will attempt to land on the satellite for an up-close crash-scene analysis. If successful, Didymoon will be the smallest object on which humans have ever landed.

Back here on Earth

In the face of impending climate change, some find the idea of planetary defense quixotic. Still, its participants assert there’s no reason not to use advancing technologies to do what we can to ensure humanity’s long-term survival in the face of recognized potential future threats. As Carnelli puts it, “Planetary defense is really a worldwide endeavor. Besides just the technology and the science, AIDA is also a really good experiment in terms of collaboration between scientists and agencies around the world. It’s the sort of thing that would be needed were an asteroid on a collision course for Earth.”

Bio-plastics could prove to be a suitable alternative to single-use plastics.