Editor’s note: For a more skeptical take on this research, see this article by Big Think columnist and astrophysicist Dr. Ethan Siegel.

Meet ANITA. ANITA stands for “Antarctic Impulsive Transient Antenna.” It seeks out cosmic rays from space while hanging from a balloon suspended over Antarctica. In the last two years, though, it has twice detected cosmic rays coming from a direction no one expected: inside the earth. According to the Standard Model (SM) of physics, this shouldn’t be possible. 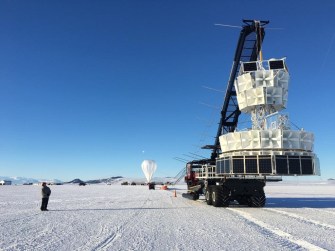 ANITA, foreground, and its balloon, background(NASA) 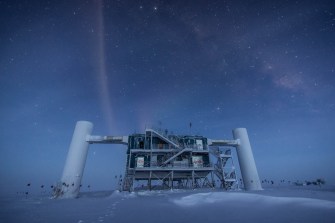 And guess what? ANITA’s not alone

In September, a paper was submitted for peer review by astrophysicists at Penn State led by Derek Fox. “I was like, ‘Well this model doesn’t make much sense,'” Fox tells Live Science, “but the [ANITA] result is very intriguing, so I started checking up on it. I started talking to my office neighbor [and paper co-author] Steinn Sigurdsson about whether maybe we could gin up some more plausible explanations than the papers that have been published to date.” Lacking any, they looked for other similar events and found three. They’d been detected by a surface-based Antarctic neutrino detector called, sensibly enough, IceCube. And when the data from ANITA and IceCube were combined, the Penn State scientists started getting excited. They calculate that whatever kind of particle is flying up and away from Earth has a less than 1-in-3.5 million chance of being any of the particles predicted by the Standard Model. Obviously, this has physicists scratching their heads trying to figure out what on earth is going on. 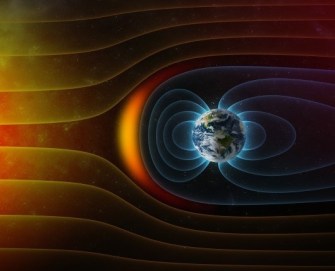 How cosmic rays are supposed to behave

First of all, of course, cosmic rays are supposed to come from out there somewhere, not here. The earth is bombarded with them all the time. The suspicion is that the newly detected particles are cosmic rays slamming into the earth on one side and somehow making it out the other.

Cosmic rays, though, are high-energy particles with relatively wide cross-sections that lead to their demise by causing them to crash into matter inside the Earth. They’re “mainly (89%) protons — nuclei of hydrogen, the lightest and most common element in the universe — but they also include nuclei of helium (10%) and heavier nuclei (1%), all the way up to uranium particles,” according to CERN. Low-energy neutrinos, on the other hand, can pass through the earth’s rocky mass, but they’re not involved with cosmic rays.

Both ANITA and IceCube track neutrinos indirectly by detecting their remains, if you will. They detect the particles neutrinos produce when they decay post-collision. Since neutrinos can’t get through the earth, though, something else is producing these particles. But what?

They could be a new kind of particle…

One candidate put forward as responsible for the event is the elusive “sterile neutrino,” first hinted at by evidence captured in the mid 1990s at the Liquid Scintillator Neutrino Detector (LSND) at Los Alamos. The data was interpreted as suggesting a weird kind of high-speed neutrino that simply passes through matter without any interaction. No one else was able to reproduce the result, and the idea fell out of favor. Until this last spring, that is, when MiniBooNE at Chicago’s FermiLab captured new signs that it might exist. The sterile neutrino would break the Standard Model if confirmed, which is one of the things that make MiniBoonE’s data exciting. “That would be huge,” says Duke physicist Kate Scholberg, who wasn’t involved with the research, “…that would require new particles … and an all-new analytical framework.”

Others have suggested that it could be a product of dark matter. Cool as either of these ideas would be, perhaps the strongest reason for the detected upward cosmic rays is even more thrilling.

Inside the Large Hadron Collider

…or they could be long-sought supersymetrical particles

According to the Standard Model, every particle has a symmetrical partner, but the particles we know about don’t match up. To resolve this apparent imbalance, a class of thus-far-hidden “supersymmetrical” particles has been proposed. It was hoped that the Large Hadron Collider could detect these mysterious — and so far just theoretical — particles, but no. Since 2012, when the last known particle predicted by the Standard Model, the Higgs-Boson, was detected, nothing new’s been found.

What the Penn paper proposes

The Penn State paper suggests these South Pole upward cosmic rays could be our first sign of supersymmetricals, specifically the partner of the Standard Model’s tau leptons. With a a couple of “S”es added to signify supersymmetry, they’d be stau sleptons.

Others agree that they could be the first actual evidence of supersymmetry. Los Alamos physicist Bill Louis tells LiveScience, “I think it’s very compelling,” though he adds that the pinpointing of a stau slepton is “a bit of a stretch.”

Fox admits he certainly can’t be sure, but that, “From my perspective, I go trawling around trying to discover new things about the universe, I come upon some really bizarre phenomenon, and then with my colleagues, we do a little literature search to see if anybody has ever thought that this might happen. And then if we find papers in the literature, including one from 14 years ago that predict something just like this phenomenon, then that gets really high weight from me.” And, guess what, he did find a prediction from 2003 of stau sleptons showing up just like this.

Tags
cosmosdark matterglaciernasanaturephysicssciencespace
In this article
cosmosdark matterglaciernasanaturephysicssciencespace
Related
The Well
This is what the fourth dimension looks like
Left–Right, Back–Forth, Up–Down. What’s the fourth dimension?
▸
3 min
—
with
Brian Greene
The physics of entropy and the origin of life
How did complex systems emerge from chaos? Physicist Sean Carroll explains.
▸
6 min
—
with
Sean Carroll
The Universe in 90 minutes: The Multiverse, time, free will, God, & more
Everything you ever wanted to know about the Universe, explained by physicist Sean Carroll.
▸
1:33:47 min
—
with
Sean Carroll
Life
“I went to space and discovered an enormous lie”
What astronaut Ron Garan saw in space changed his life forever – here’s what it taught him.
▸
8 min
—
with
Ron Garan
The Well
The 3 “demons” that haunted legendary scientists
Darwin, Descartes, and Maxwell all believed in these science ‘demons.’
▸
7 min
—
with
Jimena Canales
Up Next
Think Again Podcasts
Jill Lepore: Why America keeps going to pieces
A nation born in revolution will forever struggle against chaos. Jill Lepore, author of THESE TRUTHS, on the political divide, public shaming, and the future of democracy.