Scientists in China have reported a major breakthrough in the quest for nuclear fusion technology, which would harness power through the same processes that occur within stars.

At the Experimental Advanced Superconducting Tokamak (EAST) reactor in Hefei, China, researchers managed to heat hydrogen within the ‘artificial sun’ to a temperature of more than 100 million degrees Celsius, or 212 million degrees Fahrenheit, at which point it becomes plasma. The temperatures inside EAST are actually about seven times hotter than the center of the sun, where the added pressure from gravity allows for fusion to occur.

On Earth, extreme temperatures are necessary to produce nuclear fusion, which occurs when two nuclei come together to form a heavier nucleus. The fusion process releases vast amounts of heat and energy, the results of which we can see when we look up at the Sun, or any star in the night sky. 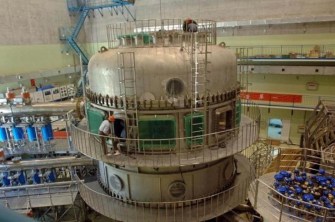 The opposite of fusion is nuclear fission, which occurs when the nuclei of atoms split in a chain reaction. This process also releases extraordinary amounts of energy, and it’s currently used in nuclear weapons and power plants worldwide. However, nuclear fission leaves behind dangerous radioactive waste. Nuclear fusion is relatively clean.

That’s partly why scientists worldwide have been racing for years to develop a safe and reliable way to produce the conditions necessary for nuclear fusion, which in theory could someday give the world a virtually limitless supply of clean energy. The recent success at EAST represents an important step toward that goal.

Still, while the recent achievement at the EAST reactor proves that the ‘artificial sun’ can produce the extreme temperatures necessary for nuclear fusion, and also allowed researchers to study how plasma reacts at such temperatures, scientists still have many milestones to cross before the technology could possibly become a safe and reliable option for limitless, clean energy. Those obstacles include finding an abundant fuel source, maintaining stability in reactors for more than seconds at a time, and scaling the technology to become commercially viable.

Fusion Really Is 20 Years Away

Tags
astronomyChinanuclear energyphysicsscience
In this article
astronomyChinanuclear energyphysicsscience
Related
The physics of entropy and the origin of life
How did complex systems emerge from chaos? Physicist Sean Carroll explains.
▸
6 min
—
with
Sean Carroll
The Universe in 90 minutes: The Multiverse, time, free will, God, & more
Everything you ever wanted to know about the Universe, explained by physicist Sean Carroll.
▸
1:33:47 min
—
with
Sean Carroll
Hard Science
10 paradoxes that will stretch your mind
From time-traveling billiard balls to information-destroying black holes, the world’s got plenty of puzzles that are hard to wrap your head around.
The Well
The 3 “demons” that haunted legendary scientists
Darwin, Descartes, and Maxwell all believed in these science ‘demons.’
▸
7 min
—
with
Jimena Canales
Harvard professor debunks the biggest exercise myths
Exercise culture is crazy. But what you need to do is exceedingly simple.
▸
with
Daniel Lieberman
Up Next
The Present
Here’s how diverse the 116th Congress is set to become
The 116th Congress is set to break records in term of diversity among its lawmakers, though those changes are coming almost entirely from Democrats.