This shape of its head is the giveaway. The massive jaws — not to mention “steak-knife” teeth — endowed it with the capacity to eat pretty much anything. Or anyone. If you’re wondering how Garjainia would fare against a Tyrannosaurus Rex, don’t bother. The apex predator lived some 250 million years ago, before the dinosaurs. 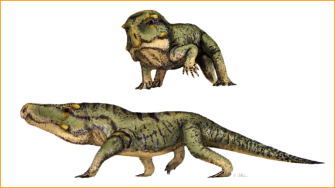 All in the ravenous family

Garjainia is a member of the erythrosuchid family, which translates approximately to “red crocodiles.” Fossils have been found in South Africa and Russia, and date from the early and middle Triassic. Garjainia was just under 10 feet long and looked not too different from our modern 300-pound Komodo dragons of Indonesia, which are also enthusiastic carnivores. The meat-eating West African Nile monitor lizards currently keeping Floridians on their toes are usually just under six feet long, by comparison.

It’s worth noting that Garjainia wasn’t the largest of the erythrosuchids — that honor, so far as we know, went to Erythrosuchus africanus, which had a 3.5-foot-long head, teeth as large as T. rex” and measured over 16 feet in length.

It’s the sheer size of Garjainia’s head that’s led researchers to the assumption that they were hypercarnivores. Of course, evolution being characterized by random mutations, they might simply have had huge noggins. Lead author of research published in November 2019 in Royal Society Open Science, paleontologist Richard Butler says, “These animals had an outlandishly large head, and we don’t know for sure why this was the case. We think it might have been linked to their role as the top predators in a number of Triassic ecosystems. Having a big, powerful head and bite is likely to be useful in capturing prey.” Also their teeth. The “steak-knife” descriptor comes from London’s Natural History Museum (NHM). 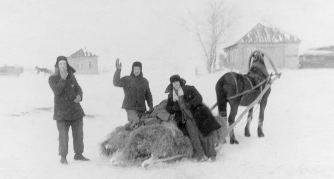 The first Garjainia fossil was found in Russia in the 1950s, followed by Vjushkovia triplicostata. While previously assumed to be examples of two different species, they were later grouped together as Garjainia prima.

Butler explained to NHM the appeal of erythrosuchids: “These are bizarre animals, but much about their biology remains unstudied. They presumably must have had very powerful neck muscles to support such a massive head, but detailed studies of their muscles have not yet been done.” He adds, “There are lots of animals from this period of time that were bizarre and interesting but we don’t know much about them at all.”

We catalogue seven more board games to teach children science, problem-solving, and even foster their creativity.