A “Super Pink Moon” will rise into the night sky on Tuesday, April 7, appearing as the biggest full moon of 2020. Weather permitting, you’ll be able to catch the best glimpse of it around 10:35 pm E.T., according to Space.com.

But don’t count on the moon appearing pink. The full moon of April is always called the pink moon, named after the North American phlox subulata wildflowers, which bloom in early springtime. As the first full moon of spring, April’s full moon has also been called “Sprouting Grass Moon” and “Egg Moon”. 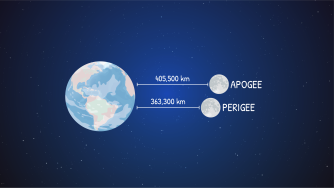 “A supermoon looks bigger than a “micromoon” (when the full moon is at apogee) because it’s about 40,000 kilometers closer to Earth on average.”

A supermoon occurs when the moon comes unusually close to Earth and simultaneously appears full. Supermoons can appear up to 15 percent brighter and 7 percent bigger than a regular full moon. Why? The moon orbits our planet in an ellipse, meaning the moon’s distance from us is constantly changing over the 27.32 days it takes to orbit the planet. 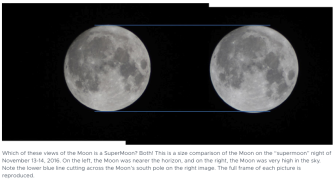 The Super Pink Moon will come within about 221,851 miles of Earth, compared to its average distance of 238,855 miles. NASA writes:

“The farthest point in this ellipse is called the apogee and is about 253,000 miles (405,500 kilometers) from Earth on average. Its closest point is the perigee, which is an average distance of about 226,000 miles (363,300 kilometers) from Earth. When a full moon appears at perigee it is slightly brighter and larger than a regular full moon—and that’s where we get a ‘supermoon.'”

Just as the moon’s distance from Earth is constantly changing, so too is the moon’s distance from the Sun. That means not all supermoons appear equally big or bright. For example, the supermoon of November 2016 came within 221,524 miles of Earth, which is about 300 miles closer to our planet than tonight’s moon. That’s the closest the moon has come to Earth since 1948.

To determine the best time to view the Super Pink Moon in your area, you can check out this free moonrise and moonset calculator. If you can’t catch a view of it tonight due to cloudy skies or social distancing, visit The Virtual Telescope Project, an online observatory that will live-stream the moon as it rises over Rome starting at 1:30 p.m. E.T..

If you miss it all, you can catch the next supermoon on May 7.

A global brainstorming marathon is throwing together brilliant ideas from around the world to rapidly develop solutions to combat the coronavirus pandemic.