Why is everybody so eager to get to Mars when the Moon is right next door? Perhaps Musk et al. are attracted by the planet’s redness. Red is danger, excitement, life. By comparison, Earth’s natural satellite exudes an uninvitingly pale glow.

This map will change all that. It shows the lunar surface as a riot of colors, its hemispheres two sizzling pizzas of varied and appetizing composure. There’s something here for everybody’s taste. Who wouldn’t want a bite out of this?

Forgive the hyperbole, but whetting the appetite certainly was the intent with this ‘Unified Geologic Map of the Moon’. For not only is it the first complete and uniform map of lunar surface geology, it’s also an important planning instrument for future manned missions to the Moon.

The map was created by the U.S. Geological Survey‘s Astrogeology Science Center in Flagstaff, Arizona. In collaboration with NASA and the Lunar and Planetary Institute, it combined six ‘regional’ maps of the Moon made during the Apollo era (1961-1975) with input from more recent unmanned lunar missions.

This included data on the polar regions from NASA’s Lunar Orbiter Laser Altimeter (LOLA) and close-ups of the equatorial zone from the Japanese Space Agency‘s recent SELENE mission.

The near (left) and far side of the Moon.

The result: a single, high-resolution map of the entire lunar surface, at a scale of 1:5,000,000 – the definitive blueprint of the Moon’s surface geology.

Of course, the surface of the Moon is not as brightly colored as these maps – according to the dozen eyewitness accounts we have, the lunar terrain is light grey in the highlands and dark grey in the ‘maria’ (the so-called seas), and gives the overall impression of a world made out of asphalt.

The colors on the map refer to different types of surface features, grouped together according to their age:

The various shades of each color refer to different feature types, such as craters, plateaus, basins, ‘maria’, plains, massifs, and domes. The detailed map also names a lot of features on the surface, and pinpoints the locations of previous landings – manned and unmanned. 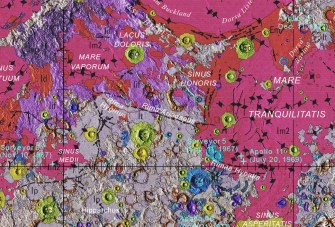 Excerpt of the new Moon map, showing the Apollo 11 landing site (below right).

This excellent map will help plan America’s next excursion to the Moon. NASA’s Artemis program aims to land ‘the first woman and the next man’ on the Moon by 2024.

Ultimately, Artemis should lay the groundwork for continuous, sustainable habitation on the Moon; and help prepare the next giant leap for humanity… yes, to Mars.

Before our attention drifts off towards the Red Planet again, here are 10 things you may not have known about the Moon, just to keep you interested.

For more on the Unified Geologic Map of the Moon and to download it in its entirety, go here at the Astrogeology Science Center of the USGS.

This short story is a fictional account of two very real people — Anaximander and Anaximenes, two ancient Greeks who tried to make sense of the universe.
Up Next
Life

The most dangerous place on Earth 100 million years ago

The Sahara is a harsh environment today. It used to be much, much, worse.