In early May, news spread in the international media that a Canadian teen made the discovery of a lifetime, while only 15 years old! By studying satellite images to confirm his theory that ancient Mayan cities were built in relationship to constellations, William Gadoury predicted the location of a lost Mayan city.

The viral spread of the story quickly drew condemnation from some scientists who didn’t believe in the science behind William’s discovery. But William is not backing down and looks to locate the ruins of the city in person, possibly as early as this summer.

William’s effort took three years, after he developed an interest in the Maya in 2012, the year when their calendar ended, a fact that many saw as predicting the end of the world. As it happened, the world did not end, but young William realized that Mayan cities were built in correlation with constellations, something which did not occur to anyone who has studied the Mayans previously.  William made this connection while trying to understand why so many cities were not built on obvious locations like near rivers and coastal areas. 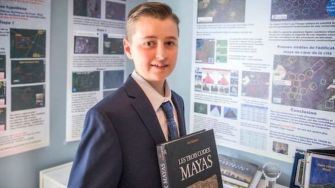 As he told the Journal de Montreal, ”They had to have another reason, and as they worshipped the stars, the idea came to me to verify my hypothesis. I was really surprised and excited when I realised that the most brilliant stars of the constellations matched the largest Maya cities.”

After analyzing 23 constellations in ancient books (known as the Madrid Codex), he saw that 117 Mayan cities, including well-known ones like Chichen Itza and Uxmal were lined up with the stars in major Mayan constellations. Digging deeper, William observed that one constellation had three stars, but there were just two related Mayan cities that were found.  William set about to find the third one. 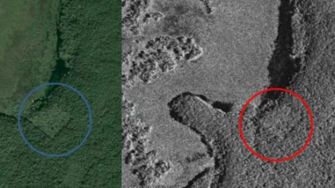 A radar image taken by RADARSAT-2 shows a square, man-made structure in the Yucatan Peninsula jungle.

By taking advantage of satellite photos from space agencies around the world and Google Earth, he overlaid the star positions with actual locations and found ruins in a remote jungle by the coast of Belize (in the southern Yucatán peninsula, on the Mexico-Belize border).  The images reveal what looks like a pyramid (believed to be 86 meters high) and about 30 buildings. If confirmed, this would be one of the largest Maya cities ever found. 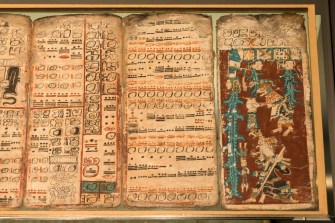 Mayan Calendar: A sky caiman vomits water on one of the last pages of the 12th-century Dresden Codex, also known as the ‘Codex Dresdensis’, one of four historic Mayan manuscripts that still exist in the world and that together suggested modern civilization would come to an end on December 21, 2012. (Photo by Joern Haufe/Getty Images)

The viral spread of William’s work has quickly drawn its share of critics like Dr. David Stuart, an expert archaeologist who specializes in the Maya, and a David and Linda Schele Professor of Mesoamerican Art and Writing at the University of Texas at Austin.

“The whole thing is a mess – a terrible example of junk science hitting the internet in free-fall. The ancient Maya didn’t plot their ancient cities according to constellations. Seeing such patterns is a Rorschach process, since sites are everywhere, and so are stars. The square feature that was found on Google Earth is indeed man-made, but it’s an old fallow cornfield, or milpa,” he said.

A number of other experts in the field expressed similar doubts. But the Remote Sensing expert Dr. Armand Larocque from the University of New Brunswick, who worked with William on interpreting satellite imagery, has spoken against the critics by pointing out that many of the naysayers focused on the wrong image of the city’s supposed location that was circulated in the media. This image did, in fact, feature a cornfield, but was not the one studied by William and his team. The correct images of the location are being studied by local archaeologists and will be published in due time.

William himself is undeterred, saying in an interview to National Geographic that the scientists are possibly “jealous” and “scared of new ideas”. Rather thoughtfully for a 15-year-old he adds:

“I know it’s not very good when I’m not accepted by critics, but it just helps me advance my research. …We’ve all seen the same patterns. There are Aztec cities that align with the constellation of Orion, and Inca sites that align with Sirius.”

In fact, to prove his discovery, this young Indiana Jones is planning to go to Mexico to locate his city for real. Maybe as early as this summer, if his fundraising efforts succeed. He thinks he needs $100,000 for the expedition. Anyone’s got an extra $100K laying around to test a great idea by a remarkable young scientist? 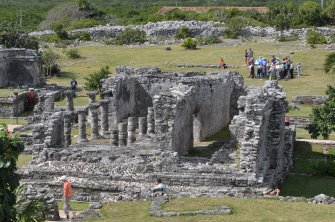 Tourists visit the Pre-Columbian Mayan site of Tulum, built on the eastern coast of the Yucatan Peninsula on the Caribbean Sea, in the Mexican state of Quintana Roo. This coastal archaeological site is one of the most well-preserved of the Mayan civilization. (Photo: CRIS BOURONCLE/AFP/Getty Images)

Tags
discoverygadourylost citymayamayanteen
In this article
discoverygadourylost citymayamayanteen
Related
The Past
Here is the most terrifying pterosaur ever discovered
Meet your new flying nightmare: Thapunngaka shawi.
Life
Cockatoos teach each other the secrets of dumpster diving
Australian parrots have worked out how to open trash bins, and the trick is spreading across Sydney.
Life
How jumping spiders can distinguish the living from the non-living
Eight-eyed arachnids can tell when an object’s movement is not quite right.
Hard Science
Every 27 minutes, there’s an X-ray aurora on Jupiter. Here’s why.
Jupiter’s mysterious auroral events are caused by vibrating waves of plasma.
Hard Science
Going rogue: runaway planets roam the galaxy
Tiny fluctuations in old Kepler data reveals four runaway planets that are reminiscent of Earth.
Up Next
A ‘Magic’ Pill That Can Neutralize Traumatic Memories And Fears?
How propranolol, a drug used for years to combat high blood pressure, can actually change the fear response to PTSD, traumatic stimuli, and triggers.