Here on Earth, an aurora borealis is a wondrous natural event that too few of us ever get a chance to see. Their occurrence remains unpredictable enough that a glimpse of one may remain elusive even for people who live in the United States’ northern latitudes.

Imagine, though, that you could see one every few minutes. That’s what happens at Jupiter’s north and south poles every 27 minutes. Not only that, but each auroral event blasts out enough X-ray energy to power our entire civilization. A new study, from University College London and the Chinese Academy of Science and published inScience Advances, solves the mystery of how and why this occurs. 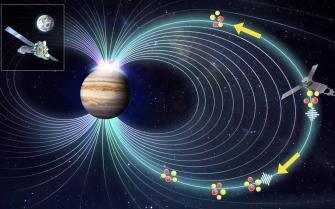 “We have seen Jupiter producing X-ray aurora for four decades,” says the study’s co-lead author William Dunn, “but we didn’t know how this happened. We only knew they were produced when ions crashed into the planet’s atmosphere.”

To unravel the mystery behind what is happening, the researchers aligned observations made over a 26-hour period by NASA’s Juno spacecraft (which orbits Jupiter) with X-ray measurements made by the European Space Agency’s XMM-Newton Observatory (which orbits Earth). Having time-aligned the two sets of observations, computer modeling revealed the mechanics behind the auroral bursts.

Jupiter has a massive magnetic field — some 20,000 times stronger than Earth’s — extending out around the planet. Plasma, or ionized gas whose atoms have been stripped of electrons as they collide with each other, races along these lines. Periodic vibrations in the magnetic field lines, the cause of which is still unknown but thought to involve interactions with the solar wind or magnetosphere, produce waves in the plasma.

Jupiter’s moon Io releases ion particles from gigantic volcanoes, which get swept up and carried along by the plasma waves, eventually smashing into Jupiter’s atmosphere. This results in the massive release of visible and invisible light, including X-rays.

Dunn says, “Now we know these ions are transported by plasma waves — an explanation that has not been proposed before, even though a similar process produces Earth’s own aurora. It could, therefore, be a universal phenomenon, present across many different environments in space.”

“Now we have identified this fundamental process, there is a wealth of possibilities for where it could be studied next,” says co-lead author Zhonghua Yao. “Similar processes likely occur around Saturn, Uranus, Neptune, and probably exoplanets as well, with different kinds of charged particles ‘surfing’ the waves.”

Co-author Graziella Branduardi-Raymont says, “X-rays are typically produced by extremely powerful and violent phenomena such as black holes and neutron stars, so it seems strange that mere planets produce them too.”

“We can never visit black holes,” says Branduardi-Raymont, “as they are beyond space travel, but Jupiter is on our doorstep. With the arrival of the satellite Juno into Jupiter’s orbit, astronomers now have a fantastic opportunity to study an environment that produces X-rays up close.”

Tags
auroracosmosdiscoveryjupiternasaspaceSpace & Astrophysics
In this article
auroracosmosdiscoveryjupiternasaspaceSpace & Astrophysics
Related
Starts With A Bang
NASA’s Habitable Worlds Observatory to finally answer the epic question: “Are we alone?”
NASA has finally chosen which flagship mission, like Hubble and JWST, will launch in ~2040. Detecting alien life is now a reachable goal.
Starts With A Bang
The galaxy cluster that broke modified gravity
19 years ago, the Bullet Cluster provided an empirical proof for dark matter. Even today, modified gravity still can’t explain it.
Starts With A Bang
Ask Ethan: What are white holes, and do they really exist?
In General Relativity, white holes are just as mathematically plausible as black holes. Black holes are real; what about white holes?
Hard Science
Earth has an eerie “sodium glow,” and astronomers use it to image stars
Air currents in our atmosphere limit the resolving power of giant telescopes, but computers and artificial stars can sharpen the blur.
The Future
Space travel will radically change human psychology and spirituality
We are traveling in a realm that once exclusively belonged to the gods. Space travel will force humanity to rethink everything.
Up Next
Starts With A Bang
How Close Are We To The Holy Grail Of Room-Temperature Superconductors?
The dream of zero resistance is closer than you may think.One of the biggest physical problems in modern society is resistance. Not political or social resistance, mind you, but electrical resistance: […]