Skip to content
Who's in the Video
Reuben Jackson
I'm a blockchain security specialist and freelance writer living in New York. I write about all things cryptocurrency and blockchain technology related
Go to Profile
Hard Science
This meteorite was here before Earth existed. Here’s why it matters.
This meteorite is the oldest known volcanic rock in the solar system, dated at 4,565,000,000 years old.
▸
with
Reuben Jackson 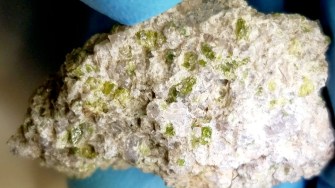 Northwest Africa (NWA) 11119 is a small, baseball-sized rock. It’s formed from sparkly green meteorite and has an unusual light green fusion crust. Broken fragments of the interior have revealed bright green and grey crystals that are up to 3mm in size. Scientists expect that it is approximately 4.6 billion years old, almost as old as the solar system itself.

For those who don’t know much about meteorites, distinguishing between a terrestrial rock and an actual meteorite can be challenging. To make matters worse, there are many sellers who try to disguise terrestrial rocks as meteorites to scam their customers.

At first glance, this meteorite didn’t look like much

When the rock was first found, the planetary geologist and meteorite curator at the University of New Mexico, Carl Agee, didn’t think that it was a meteorite at all. In fact, he thought it was a rock from Earth.

Despite the rock bearing a close resemblance to volcanic rocks on Earth, its chemical composition revealed that it was definitely from space and that it wasn’t just a regular meteorite. 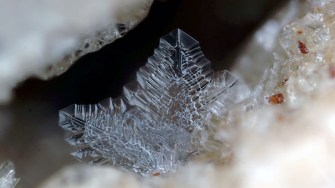 NWA 11119was revealed to be 4.6 billion years old. This makes it the oldest igneous meteorite (meaning that it was formed by the cooling and solidification of either magma or lava) ever discovered. Scientists have discovered several non-igneous meteorites that are even older than this.

About 30% of the meteorite is comprised of tridymite, which are essentially large silica crystals. Such a high tridymite content is virtually unheard of in meteorites. It’s comparable to the levels found in volcanic rocks on Earth.

It’s easy to see why this discovery is so exciting. It’s not very often that we come across things that are older than our planet—but there have been a couple of instances over the past few years.

What’s more, as little as a couple of months ago, scientists discovered stardust particles on Earth that are even older than our solar system. Its chemical composition, which shows us how far the particles had traveled, suggested that the grains had to be significantly older than 4.6 billion years.

There is still so much we have yet to understand about how planets are formed, and in particular, how the Earth’s crust might have been formed.