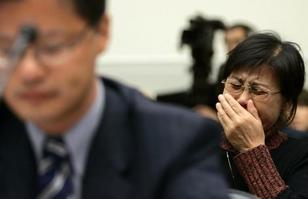 One minute you’re the CEO of one of the most powerful Internet companies in the world, the next you’re a “moral pygmy” being disgraced by media publications all over the world. Reputation on the Internet can be difficult to measure, and even more difficult to protect. The “moral pygmy” quote came during a congressional hearing in Washington, DC that looked into Yahoo’s dealings in China and the company’s willingness to identify a Yahoo account holder to the Chinese government. A Congressman from California had particularly strong words for Yahoo co-founder and CEO Jerry Yang and his legal sidekick (Michael Callahan): “While technologically and financially you are giants, morally you are pygmies. This testimony has been an appallingly disappointing performance.”

The outrage over Yahoo’s dealings in China all started when it turned over information about a Chinese political dissident to the Chinese government:

“Yang and Callahan were battered with criticism from both

Democrats and Republicans over the case of Shi Tao, a reporter

accused by Chinese authorities of leaking state secrets abroad and

sentenced last April to 10 years in prison. Shi’s crime was to forward to foreign human rights groups an

to avoid coverage of the 15th anniversary of the Chinese army

killings of pro-democracy protesters near Tiananmen Square in 1989,

At Tuesday’s hearing, Yang apologised to the committee and to

Shi’s family, and said Yahoo was doing what it could to help get

Shi released. With members of Shi’s family seated behind him among the

spectators, Yang told the committee that Yahoo did not know that

the personal information sought by the Chinese government involved

a political dissident when its China office turned over the

The good news for Yahoo, at least, is that it recently sold its Yahoo China subsidiary to Chinese internet

company Alibaba.com in exchange for a 40% stake in

Alibaba. As of yesterday, when Alibaba had a spectacular IPO, that stake just tripled in value.

The company that went bankrupt on Christmas Eve

Over the past few years, one of the most interesting innovations in the airline industry has been the growth & expansion of the “business class only” travel segment for service […]