Jim Zarroli and John Ydstie filed stories for NPR this week on the “new normal” for the American economy, with experts anticipating that 2% annual economic growth will be a long term trend, a major shift from the 3% growth of past decades.  Importantly for climate advocates, a 2% growth rate threatens to lock in unemployment rates at 10-12%. 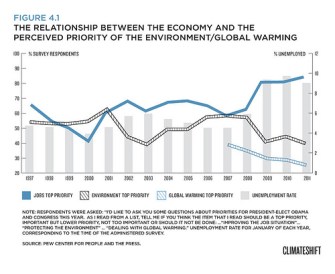 With a new normal of double-digit unemployment — and with a prevailing center-right mood — any policy campaign that leads with a focus on climate change as the animating issue intended to mobilize political change — as Gore appears ready to do with his Climate Reality Project — is only like to appeal to a base of strongly committed environmentalists and progressives.

Obama and others have been criticized by Gore and his base for “not talking about climate change.”  The Obama Administration has pursued instead a policy and communication agenda that emphasizes the role of government in catalyzing innovation, with a strong emphasis on energy innovation.  This strategy, given unemployment rates and economic conditions, is likely to have far more political traction than a climate first campaign as led by Gore and others.

As one economist explains to NPR, greater investment in innovation might lift economic growth closer to 3%, but what’s still missing is public funding of innovation efforts.

Economist Ken Goldstein of the Conference Board explains that for the first part of the year, the U.S. economy grew very slowly — an annualized rate of only about 2 percent.

“Without innovation, not only would you be stuck at 2 percent — we might be lucky to get 2 percent growth,” he says.

Goldstein says a concerted focus on innovation could boost growth by perhaps half a percentage point.

That’s nothing to sneeze at when you consider that just 18,000 jobs were created last month.

But innovation, and the jobs it creates, doesn’t happen overnight. It takes time, and there’s another stumbling block — money.

“Where we are right now is not a dearth of ideas, but the ability to finance those new ideas into new companies, new products, new services. It hasn’t broken down, but it has slowed down,” Goldstein says.

Right now, not much public money is being invested in innovation, and despite historically low interest rates, there’s not all that much private-sector investment, either.

From another of the NPR stories, see the figure below charting the implications of a 2% growth rate, changes that will be top of mind for most Americans.  Given the limited pool of worry for the public, under these conditions engaging the public on climate change will only likely grow more difficult.

How Samuel Morse Telegraphed a New Direction for American Art

When you hear the name Samuel F. B. Morse you most likely think about Morse code or the telegraph. In reality, Morse only co-invented the code that bears his name […]