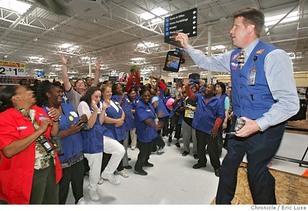 The Wal-Mart name gets dragged through the mud so often these days that it’s nice to give props to the company when it comes up with innovative new ideas. Buried in an article about innovative workplace practices is this little gem about the Bentonville, Arkansas retailer: “Wal-Mart Stores has

introduced standing-only meetings where BlackBerries are left at the

door. The point is to cut to the chase…”