The next up in my Volcano Profiles Series, is one of the most remote volcanoes on the planet, yet also one of the more closely studied and monitored (albeit from afar). Joining Vesuvius, Hood and Rabaul is Mt. Erebus, an active volcano on Ross Island in Antarctica and it definitely has some unique features.

Mt. Erebus in Antarctica with a local resident in the foreground.

The lava lake at Mt. Erebus imaged by the NASA EO-1 satellite.

The phonolite lava lake in the inner crater at Mt. Erebus. Image taken in 1983, courtesy of MEVO. 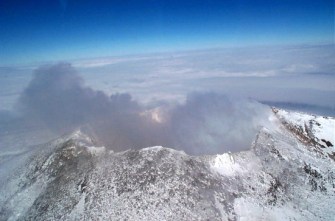 Gases and steam coming from Mt. Erebus in Antarctica.