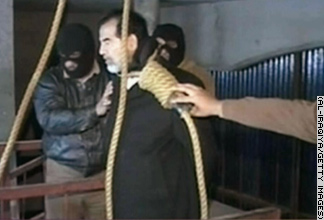 In DC over the weekend, the conversational buzz at coffee shops, wine bars, and holiday parties has focused on the graphic reports of Saddam Hussein’s execution. Friends from both sides of the political fence are using words like “banal,” “barbaric,” “creepy,” and “grotesque” to describe their reaction to the events. Questions about the timing of the execution, the chaotic nature of the trial, and the not-so-civilized death penalty, (“Only in Iraq and Texas…), serve as fodder for much of the chatter.

The mood is a stark contrast from cable news coverage and the front page headlines celebrating the “justice delivered” to a “brutal dictator,” with pictures of Arabs celebrating in Dearborn, Michigan and Iraq, or file footage of Saddam shooting guns into the air or unsheathing swords. 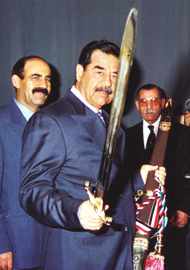 Absent from mainstream coverage is mention of the intense criticism from world leaders of the use of the dealth penalty and the major questions raised about the trial. Buried in the back pages of the Sunday NY Times are just a few glimpses of an alternative take on the events.

HEADLINE: Around the World, Unease and Criticism of Penalty

Erkki Tuomioja, the foreign minister of Finland, which holds the rotating presidency of the European Union, said, “The European Union has a very consistent stand on opposing the death penalty and it should not have been applied in this case either — even though there is no doubt about Saddam Hussein’s guilt over serious violations against human rights.” In an editorial, The Guardian newspaper in London took an even more unequivocal position, saying, “The death penalty is an unacceptably cruel and unusual punishment, even in Iraq.” The Vatican went so far as to call the execution “tragic” — echoing expressions of revulsion by Muslim leaders, both in the West and in the broader Islamic world. “A capital punishment is always tragic news, a reason for sadness, even if it deals with a person who was guilty of grave crimes,” said the Rev. Federico Lombardi, the Vatican spokesman. “The killing of the guilty party is not the way to reconstruct justice and reconcile society. On the contrary, there is a risk that it will feed a spirit of vendetta and sow new violence.”

Despite this application of international law against Mr. Hussein, experts say, his conviction for crimes against humanity has not significantly reinforced efforts to apply concepts of international human rights law around the world. They argue that the trial has been too widely perceived, both in Iraq and abroad, as a chaotic and politicized process with many serious flaws carried out by inexperienced judges. “It’s highly doubtful that courts elsewhere might cite this judgment, given its poor credibility,” said Richard Dicker, director of Human Rights Watch’s international justice program. Although domestic courts are now trying cases that include violations of international human rights law, the credibility of the Baghdad tribunal was also questioned by some because it was organized by the United States. European countries that had been asked for help said they could not participate because they had abolished the death sentence.

Rights groups and some international lawyers have deplored the execution as hasty. Some said the execution, based on a comparatively small case involving the killing of 148 civilians, cut short Mr. Hussein’s second and far weightier trial for genocide, the gravest charge. “Such a rapid execution before the conclusion of the genocide trial is a serious legal setback and harms the credibility of the court,” said Antoine Garapon, director of the Institute for Advanced Legal Studies in Paris. He and some other lawyers argued that even if others were to stand trial for genocide against the Kurds in 1988, the person deemed most responsible would never face judgment. Many Kurds, in fact, say they have mixed feelings about his execution because it denies them the satisfaction of seeing Mr. Hussein face further evidence of genocide presented at the Kurdish trial, which was only a few weeks away from a conclusion.

Here at ScienceBlogs, the popular PZ Myers has this to say on the matter.

OVER AT THE HUFFINGTON POST, they capture Tom Brokaw’s comments on the Don Imus Show comparing Hussein’s hanging to the “wild west.”

AT TRUTHDIG, Robert Sheer has this to say about the US Coverage of Hussein’s Hanging.