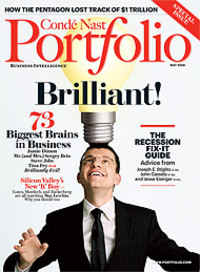 The May 2008 issue of Portfolio magazine (“the brilliant issue”) has a listing of the 73 most brilliant thinkers in business – the rebels, upstarts, game changers and connectors who are changing the way we think about business. There are some familiar names, of course – Steven Spielberg, Rupert Murdoch & Lloyd Blankfein – but also a number of people you may not have heard of, like Anne Wojcicki and Linda Avey of 23andMe. (Actually, come to think of it, you may have heard of Anne Wojcicki – she’s the wife of Google co-founder Sergey Brin!)

Innovation and the Simple Life

As John Maeda points out in his bestselling book The Laws of Simplicity, companies can unlock a tremendous amount of innovation by embracing the principles of simplicity.