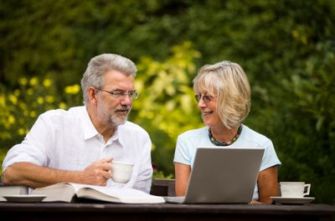 The Baby Boomer Generation has had a disproportionate economic and cultural impact on nearly every trend of the past 40 years, so why not the Internet? Of late, there’s been a steady stream of stories, articles and anecdotes about the Baby Boomers and the Web — including all those stories of how Twitter users skew so much older than just about any other social media user group. As a result, I’ve been putting together a broader thesis about The Baby Boomer Web.

Simply stated, the Web is being increasingly impacted by an older generation of Internet users who suddenly have the time to spend on sites such as Facebook — as well as the wealth and affluent heft to be courted by online marketers. Suddenly, the 18-24 demo isn’t looking so hot… In fact, the latest data from Nielsen in a CNN story about the demographics of the Web includes some relatively surprising and striking statistics about Web usage in a sidebar — only 10.27% of Internet users between the ages of 18-24 use Facebook; 15.46% use MySpace; 3.99% use LinkedIn; and 9.51% use Twitter. Comparatively speaking, the Baby Boomer generation is much more active when it comes to social media and social networking sites.

For Barron’s, the Baby Boomer Web is more than just a theme — it’s a tradable investment thesis. About two weeks ago, the cover story on Barron’s was Boomer Consumers. The article chronicled how certain sectors of the economy continue to be significantly impacted by Baby Boomers, and outlined why marketing professionals may want to give the Over 50 crowd a bit more thought. According to Barron’s, the 50+ demographic now accounts for 45% of all U.S. consumer spending, and that figure could approach 50% by 2015. Even in areas that you might not expect — such as new household furnishings — Boomer spending accounts for nearly 40% of all spending. By 2015, in fact, Boomers will represent 40% of all U.S. consumers.

All of this has implications for the Web, of course. The new hot areas — in addition to pharma and health care — could be beauty products for Baby Boomers, travel & entertainment companies, and financial services companies catering to an older, savvier investment population.

The Netflix show about a Birmingham crime family and their personal demons concluded earlier this month.
Up Next
Guest Thinkers