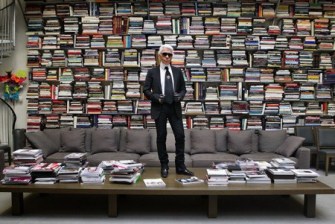 The argument for or against e-books always seems to boil down to one central issue: e-books can not be touched, bookmarked and lovingly annotated in the same way that real books can (sorry, Kindle). The early adopters will always embrace digital content, on whatever device is offered to them. It’s the middle- to late-adopters who need an additional emotional connection to that digital content before they will embrace tablets and e-books. The current approach to “flipping pages” on a tablet is a cute start, of course, but there’s more that can be done to create emotional attachments to digital objects.

In fact, I would argue that one of the reasons why people love physical books is that they announce to other people — friends, guests, or the nosy onlooker — that I am a Book Person. Take, for example, this picture of Karl Lagerfeld posing in his apartment’s library. He is, without a doubt, a Book Person. (According to Todd Selby, Karl even owns the bookstore next to this fabulous wall-to-wall book fantasy apartment.) If he had been holding an iPad tablet in this image, would you have thought the same thing? Think whatever you want about the man, it’s impossibe to think about Lagerfeld again in the same way once you’ve seen these impressive walls of books.

With tablets, you don’t get that impression. A tablet does not announce I Am A Book Person. Peek over the shoulders of random people on commuter trains or urban subways — it’s surprising how many people are doing something like playing Angry Birds rather than digging into some serious reading. So people who read serious books on their iPad or Kindle need to find other ways to signal to others what they’re up to.

It’s the same reason people buy “coffee table books” — usually large, heavy-ish, picture-laded works so full and plump that you don’t actually read them or take them anywhere — you just leave them in places where people will find them and say, oh wow, I had no idea that he was such a fan of molecular gastronomy and might possibly be contemplating a trip to Spain to visit the wonderful chef Ferran Adria. Or, oh wow, that’s quite interesting that he knows so much about the Bollywood film industry and might have been to Bombay recently. Coffee table books are – quite simply – a statement that you want to make to people.

How can Tablet users replicate these types of “statements”? One idea that a colleague mentioned to me involved the notion of “dynamic weathering” of applications — the more that you use an app, the more that it would appear “weathered” and used. People would know how often you were reading by how “worn” your iPad’s screen looked, for example. 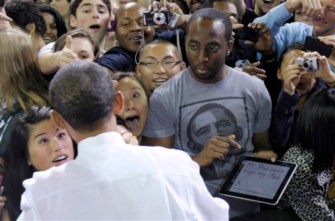 Another idea might be new ways of creating emotionally resonant “signatures” for digital objects. During the Obama election disaster of November, one of the Internet memes for a short time was how one enterprising young man got Obama to sign his iPad tablet using an Adobe Ideas app. This is an important point about books and “emotion” — if you’ve ever been to a book-signing, it never fails that people want to get a “personalized inscription” on their books to make them more special. How can tablets replicate this as well?

Finally, there’s the whole idea of using books as a conversation starter. The classic example, of course, is the young man on the subway who catches the eye of a beautiful young girl and decides to initiate the courtship ritual through a casual, “Oh, I love that book, too.” Or, think about the classic scene on a leafy liberal arts campus, where it’s intellectually in fashion to wear black turtlenecks and carry around books by heavyweight foreign thinkers. Nothing gets a conversation started faster than peeking over your cup of espresso and seeing the person next to you reading a little Dostoevsky.

The genes responsible for facial features may also influence behavior.
Up Next
Culture & Religion