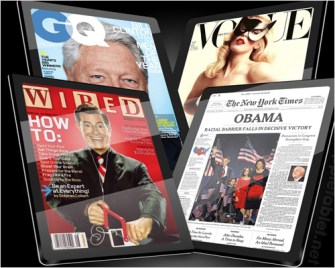 Why aren’t more publishers embracing the iPad as a disruptive platform? Out of the Top 20 highest-circulation magazines, only 6 have iPad apps of any kind — and, of these, only Time has made any kind of splash with the launch of its app. (I saw full-page print ads for it and promptly downloaded it to my iPad) So, not surprisingly, David Pakman of VC firm Venrock recently lamented the inability of major publishers to win any kind of clear first-mover iPad advantage: Why Aren’t More Print Publishers Cozying Up with the iPad?:

“More than five months
after [the Apple iPad] has been announced and the developer tools made available, and
more than 60 days after shipping, why is Wired one of the few print
publishers to make the leap and offer a version? The Wall Street Journal has a decent
app (but downloads take forever), the New York Times has an anemic reader
which showcases only a handful of stories each day (many duplicated in
each section), the NY Post released an app which just offers pictures,
and Vanity Fair offers a meager PDF of the print magazine for a
whopping $5 per issue. USA Today seemed to step up with a nicely
designed app.

But it’s telling that so few of the traditional print
publishers have taken the last five months to rethink the way a
magazine or newspaper ought to be delivered digitally and devote
sufficient resources to getting something great out on time. Wired’s
editor Chris Andersen made some noise
about how his staff did this, but frankly their implementation is also
mostly a glorified PDF with some videos thrown in. Amazingly, URLs are
not hot-linked in Wired nor Vanity Fair, email addresses are not
clickable, text is not selectable nor are articles tweetable.”

Which leads to the inevitable question: Is first-mover advantage overrated in the business world? It’s often an easy argument to make that it makes sense for a company to become the first-mover. At least from a buzz/PR perspective, making the first move is good for some press hits and media mentions. However, my sense is that second-mover advantage might be just as useful if you can learn from the mistakes and failings of the first movers.

After all, outside of the business world, first-mover advantage is not always, well, advantageous. Does it always make sense to choose to receive the ball first in a football game if you win the coin-toss? Does White always beat Black in a game of chess, despite always moving first? The only time that first-mover advantage has a clear and overwhelming advantage, it appears, is when it comes to nuclear deterrents.

Musings on the Future of Capitalism: What’s Mine Is Yours

A number of visionary companies that are changing the way we think about consumption: Zipcar, FreeCycle, Netflix, Etsy, CouchSurfing and Zopa.