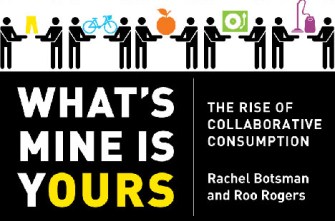 In their new book What’s Mine is Yours, Rachel Botsman and Roo Rogers brilliantly capture the current socio-economic zeitgeist. While the last 50 years were all about the hyper-consumerism fueled by advertising and credit, the current period is all about the creation of a new model of collaborative consumption that is based on a belief in the commons, trust between strangers and new ways to exploit excess capacity. The two authors connect the dots on a number of intertwining trends – from crowdsourcing to environmentalism – by adroitly referencing a number of important thought leaders (e.g. Nobel Prize winner Elinor Ostrom, who has written extensively about commons-based societies). As they lay out the basic principles of their economic model, Botsman and Rogers highlight a number of visionary companies that are changing the way we think about consumption: Zipcar, FreeCycle, Netflix, Etsy, CouchSurfing and Zopa.

In the final chapter of their book, Botsman and Rogers set out a handful of fundamental premises that can be taken as a mini-Manifesto about the future of capitalism:

(1) People will have “reputation bank accounts” alongside their regular bank accounts, as well as a reputation rating that will literally measure their contributions made to various types of collaborative communities

(2) Peer-to-peer marketplaces where people “sell” their excess capacity (cars, energy, square footage, products, food) will be viewed as a secondary source of income

(3) There will be an explosion in services that enable consumers to repair, upgrade and customize owned or secondhand products

(4) People will be able to use talents, skills or ideas as a “virtual currency” instead of paying with cash or credit

(7) There will be a whole ecosystem of apps and software for our phones and computers that will enable consumers to share any kind of product or service.

These principles are explained in greater detail on the website for Collaborative Consumption.

The Future of Visual Storytelling: From The Last Supper to the iPad Tablet

Of late, I’ve been thinking a lot about visual storytelling and the various ways that the Internet and digital devices like the iPad require us to process information and content. […]