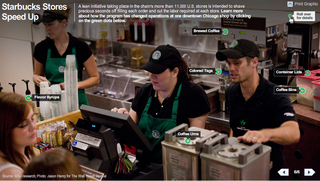 Throughout 2009, Starbucks has been making waves about how much it

is changing in response to new consumer spending patterns. First, it

of Pike’s Place coffee. Then, it was the announcement that it would

consider closing down some superfluous Starbucks stores and pursue

other cost-cutting measures. This week, it was rumors on the Internet

of a “stealth” Starbucks brand known as 15th Avenue E Coffee and Tea. But I literally spilled my (think) coffee this morning when I read that Starbucks was embracing Japanese-style “lean retailing” techniques as a way to break out of its funk. This is serious MBA-case study type of material.

All that talk about “lean retailing”, of course, hearkens back to the 1980s, when U.S. companies by the hundreds embraced the “lean manufacturing” techniques of the Japanese

in order to become more competitive. That, in fact, appears to be

exactly what Starbucks CEO Howard Schultz has in mind. Today’s Wall Street Journal article even mentions that Starbucks has a “VP of Lean Thinking” who is an acolyte of the Toyota lean manufacturing system:

Heydon, the company’s “vice president of lean thinking,” and a student

of the Toyota production system, where lean manufacturing got its

start. He and a 10-person “lean team” have been going from region to

region armed with a stopwatch and a Mr. Potato Head toy that they

challenge managers to put together and re-box in less than 45 seconds.

Mr. Heydon says reducing waste will free up time for baristas — or

“partners,” as the company calls them — to interact with customers and

improve the Starbucks experience. “Motion and work are two different

things. Thirty percent of the partners’ time is motion; the walking,

reaching, bending,” he says. He wants to lower that.

If Starbucks can reduce the time each employee spends making a

drink, he says, the company could make more drinks with the same number

of workers or have fewer workers.”

This is incredible, groundbreaking stuff. Starbucks is even doing

all kinds of “motion studies,” where they analyze how baristas move and

where ingredients are located, to see if they can save a few seconds

here and there, in order to make their coffee-making process more

spent at Starbucks drive-in windows, to get that number down as much as

possible. Around the cafe, they are utilizing timers, to make sure that

If it were a different company, say, Dunkin’ Donuts or Mickey D’s, I

so newsworthy. But this is Starbucks — which staked a fortune on

creating a global brand around $4 coffee and a leisurely,

If Starbucks is already embracing Japanese-style efficiency, look for

pare back on just about everything…

This technological feat changes our cosmic history.
Up Next
Guest Thinkers