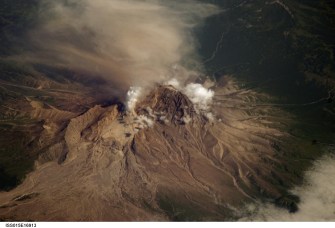 Shiveluch in Kamchatka experience a small eruption today. Russian authorities reported a ~4,500 meter ash column with associated local earthquakes, likely related to the eruption. In the same article, both Karymsky and Klyuchevskaya Sopka (also known as Kliuchevskoi) are erupting or showing signs of increased activity.

Shiveluch is one of the many active volcanoes along the Kamchatkan arc that is on the far eastern side of Russia. It has been continuously erupting since 1999, mostly in the form of small explosions, pyroclastic flows and lava flows/domes – your typical arc volcano.

Pando is a stand of aspen in Utah that is 14,000 years old and weighs 12 million pounds. Humans threaten to end its long reign.
Up Next
Guest Thinkers