More than 50 years after the publication of CP Snow’s seminal Two Cultures, interdisciplinary partnerships between science and other academic “cultures” are being urged once again. Today, the focus is not the Cold War but rather the challenge of engaging society on climate change and other environmental problems.

In an open access article published this month at the journal Frontiers in Ecology and the Environment, I joined with several colleagues to describe the potential for communication partnerships that involve interdisciplinary initiatives across universities and community-based institutions.

The essay is based on the insights, revelations, and conclusions from the 16 member Columbia River Quorum, which was composed of scientists, scholars, and professionals – four representatives from each of what we describe as the four academic “cultures” – who met in Oregon in 2009 for the first of what we hope will be many similar summits across the world (see photo below). The goal of that meeting was to identify and build synergies by which members of traditionally separate disciplinary cultures — specifically the environmental sciences, philosophy and religion, the social sciences, and the creative arts and professions — can accomplish collaboratively what none are capable of doing alone.

One of co-authors of the article and an organizer of the Four Cultures summit in Oregon was Mark Hixon, professor of Marine Conservation Biology at Oregon State University. In an interview I did with Hixon, he reflects on the origins of the summit and his outlook on the urgent need for Four Culture initiatives at universities across the country. Along with the interview, I have posted a photo and a list of the participants in the summit.

What do readers think about the need for “four culture” collaborations?  Do you know of particularly strong examples? Do you agree with Hixon that scientists shouldn’t be worried about a conflict between engaging as citizens and their credibility as scientists?

What motivated you to organize the Columbia River Quorum?

My Oregon State University (OSU) philosopher / writer colleague and friend, Kathy Moore, and I were sharing lunch, lamenting on the increasingly bad news regarding the state of the global environment and the lack of substantial remedial action by the United States regarding climate disruption.  We focused on the need for our society’s response to accelerate past the exponentially increasing rate of environmental degradation if all the Earth’s children and grandchildren are to enjoy healthy lives.

Where did the idea come from?

The need for an accelerated response by society to climate disruption and other pressing environmental issues stimulated the idea that we need new synergies.  Natural science has done a wonderful job documenting environmental threats, yet that knowledge alone has not stimulated an adequate response within our nation.  Needed are all four academic cultures — natural sciences, social sciences, philosophy and religious studies, and communication and creative arts — to fully engage with each other to create those synergies.  Once that need became clear to us, hosting a quorum with representatives from each of the four cultures was the logical next step.

Over the course of the weekend, what things did you come to realize?

In March 2009, Kathy’s organization, OSU’s Spring Creek Project, hosted 4 members of each of the 4 academic cultures at a beautiful retreat in the Columbia River Gorge (see photo below).  The energy of the weekend was exciting and truly palpable.  Ideas flowed like the great flood that carved the Gorge!  I realized then that the time was right for these new synergies to develop — that together we in academia truly can help to bring about “the great turning” in new, more integrated, and more effective ways.

If you were to emphasize two take away conclusions from the experience for environmental scientists, what would they be?

First, let go of the entrenched worldview that our role as environmental scientists is ONLY to provide data to society regarding climate disruption and other environmental threats — that providing data ALONE will stimulate society to respond to these threats.  That partial and isolated role has failed and will continue to do so.

Second, engage with social scientists and non-scientist colleagues, indeed, with the public at large regarding these important issues that affect us all.  In short, do not abdicate your citizenship — actively engage in changing the world!

Why do you think some scientists might have reservations about interdisciplinary partnerships focused on public engagement?

There are many reported reasons:  (1) the perceived lack of time and energy as we focus exclusively on teaching, research, and university administration, (2) the ineffective worldview that our role is only to provide information, (3) the false belief that our credibility as scientists will dissolve if we fully engage as citizens, etc.  I personally reject all these excuses, and I highly recommend that all scientists read Michael Nelson’s recent papers (PDF) on these issues. [Nelson is a professor of philosophy at Michigan State]

What do you think are steps that can be taken at the university and disciplinary level to encourage greater “Four Culture” partnerships?

Traditional university organizational structures are insufficiently integrated and often terribly isolating, especially between the sciences and the liberal arts.  At OSU, two recent efforts building on the Spring Creek Project are fostering new synergies among the four academic cultures.  First, the once fully separate colleges of science and liberal arts have been folded into a single division of arts and sciences.  Second, a new environmental humanities initiative, the interdisciplinary Three Rivers Institute, has been formed to foster integration among human values, science, and environmental leadership.

If colleagues at another university wanted to organize their own Four Culture quorum, what advice would you give them?

Go for it!  Start with a simple foursome of one member from each culture, then build from there.  I truly believe that people are ready for revolutionary integration.  All four cultures have been working for changing the world in positive ways, largely in parallel, isolated, and often (but certainly not always) ineffective.  The time is ripe for new synergies that will accelerate our society’s response to pressing environmental threats. 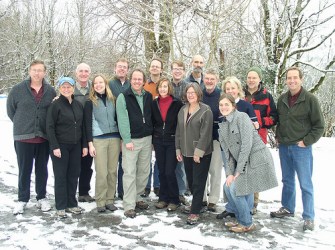 The 2009 Berlin exhibit of works about climate changeby Brazilian artist Nele Azevedo (interview) which includes the painting displayed at top.

Binary black holes eventually inspiral and merge. That’s why the OJ 287 system is destined for the most energetic event in history.
Up Next
Surprising Science

A new study of birds concludes that parents get more help when they are sexually faithful to each other and “leaves little doubt that promiscuity corrupts social life in birds.”